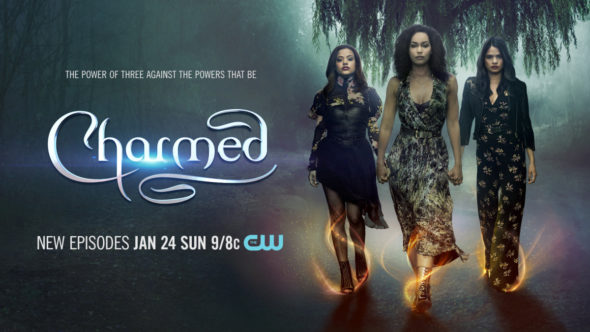 The Charmed TV series hasn’t been a big hit in the traditional ratings and is typically one of the network’s lower-rated scripted series. Still, The CW relies less on the ratings than other networks.  Will Charmed be cancelled or renewed for season four? Stay tuned. *Status Update Below.

What do you think? Do you like the Charmed TV series on The CW? Should it be cancelled or renewed for a fourth season?

*2/3/21 update: Charmed has been renewed for a fourth season on The CW.

One of the shows is charmed and the other is charmless.

Glad that fans have given the reboot a chance just hope the creators will too.

I’m excited for the fans although they could’ve done a better job.

Can’t wait for this show to end. The show is joke a present, an inflatable sex doll. After all I signed a petition to prevent this show from ever airing. The power puff girls is not airing and yet one of the actresses left. The actresses who left the charmed reboot thought the show was going to be good. :'(

Season 1 of the reboot had some gd ideas. However the approach wasn’t quite right. There was a photo of the leads with pure white eyes doing rude hand gestures (now nowhere to be found). We want a gd TV show but it’s too late for that now.

They also had some green gas spells.

They seriously should’ve included the OG sisters in the first place! There are plenty of ideas on how they could include the OG sisters. One of OG’s sisters could’ve been their grandma or multivevers! Multiverse storyline is pretty much in every fictions show, such as flash, dr strange etc. I think season 4 is pretty much finale season for reboot!

Actually, none of the actors from the OG were interested in this version of Charmed. They had very negative things to say about this show. Rose McGowan and Holly Marie Combs even “expressed their displeasure” in an Instagram live video about the new reboot. In my opinion, it just made them look very ungracious, or maybe even envious that maybe something half decent came out of the same idea (which really started from Charlie’s Angels to begin with). Sarah Jeffreys (Maggie) tried to leave her own opinion about what had been said by the two OG starlets, and Rose McGowan… Read more »

This show in a sense is a parody of caos.

This show doesn’t know how to look after itself.