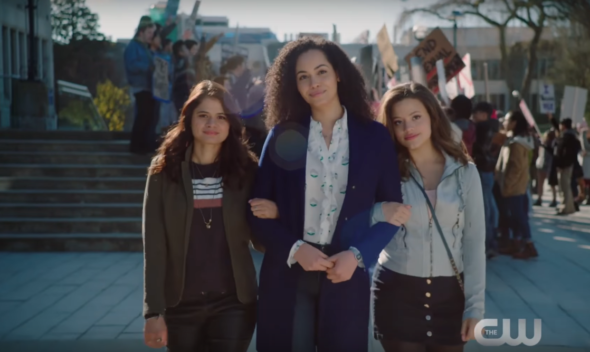 As reported earlier, The CW has ordered a reboot of Charmed. The original drama starred Alyssa Milano, Shannen Doherty, and Holly Marie Combs as three sisters who discover that they are powerful witches with supernatural abilities. The show ran on The WB from 1998 to 2006.

The CW’s Charmed reboot comes from Jane the Virgin creator Jennie Urman and “centers on three sisters in a college town who discover they are witches. Between vanquishing supernatural demons, tearing down the patriarchy, and maintaining familial bonds, a witch’s work is never done.” The cast includes Jeffery, Melonie Diaz, Madeleine Mantock, and Rupert Evans.

On social media, Jeffery said fans of Charmed have nothing to worry about. The new series will respect the original:

What do you think? Are you a fan of the original Charmed series? Will you watch the reboot?

I loved the 1st Charmed! I will watch the Reboot! I think its going to be just as Awesome!! I am happy they are doing a reboot. It don’t have to have the same actors. To be a great show. I think the new actors will do a great job! Hope everyone will watch it and like it too. So we can have a season 2 ! That would be so kool!! Charmed was my most fav show! I hope the reboot will make it to a season 2! Keep the reboot please!! 🙂 I’ll be watching for sure!!

3 WOC? All 3 are more white than my grandmother from Liberia.

I really don’t understand the CW in wanting to pass on Wayward Sisters but rebooting Charmed. The Wayward Sisters would have been fresh and interesting compared to another reboot. Has everyone forgotten how to make original shows anymore ?

I think the reboot will be just as awesome as the first Charmed. I like reboots of my past fav. shows

I like reboots of my past fav. show’s. I think the reboot will be just as awesome