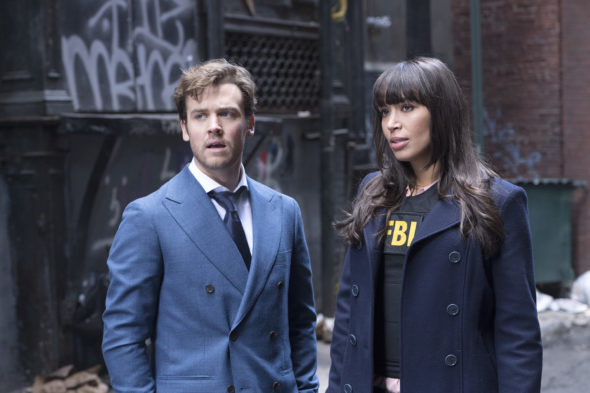 Deception just wrapped its first and only season, but what would’ve happened next? Recently, EP Chris Fedak told EW his plans for the cancelled ABC TV show.

The crime drama centers on Cameron Black (Jack Cutmore-Scott), an illusionist who uses his tradecraft to help the Feds apprehend some of the most elusive criminals in the world. Ilfenesh Hadera, Lenora Crichlow, Amaury Nolasco, Justin Chon, Laila Robins, and Vinnie Jones also star.

As reported earlier, ABC cancelled Deception after one season. However, EP Chris Fedak told EW there were plans for a second season:

About a month ago, we put together a pitch for season 2, which was epic and a really fun flip on the show that would have had Jonathan out in the world with the Mystery Woman, having adventures there. For me, I don’t think that Cameron would have been trapped in jail for too long. I think that he would have been there for probably 36 hours, enough time for him to seriously get into trouble. He would save himself by trying to do some magic tricks and hiding. With the DNA test or fingerprints, they would realize what had happened. He would be out of jail, but that’s only the beginning of it. The idea that you’ve been betrayed by your brother, the guy you’ve been trying to save, that’s such a delicious [story line] — Cameron going after his brother and trying to figure out what exactly happened. I think that would have been a huge twist on our show.”

And what about Mystery Woman? Would season two have revealed more about her?:

No, here’s the thing about the Mystery Woman: She’s an Ashley. No, Tiffany. I think she’s definitely a Tiffany. [Laughs] For me, one of the things about season 2 was about Johnathan coming to know who she really is, and it’s seeing her as a tragic character, in a way. What is her real name becomes a thing where it’s like, she has lots of names. She doesn’t reveal to anyone what her true name is, and that would have been something that would play out over the course of the season until she finally does, and that would be another emotional connection between the two of them. It’s the secret she keeps close, and we would of course give her a number of different names, and that was a part of the fun of it. I just like calling her Mystery Woman. The moment we were like, “So we have this Mystery Woman, and we’ll give her a name at some point.” I’m like, “Maybe we don’t.””

What do you think? Did you watch Deception? Would you have watched season two?

I’ll do anything to get a season for this movie… Its so interesting, i never wanted it to end.

I would totally do anything to see the season two of deception..it’s a killer I can’t imagine how you didn’t get enough rating…the rating I give to the movie is enough for everyone, trust me

This was a really really lovely show. Pliz bring it back. We need S2.
The twist, the romance, the comedy, the Ilusions. Come on this is entertaining. Bring S2 pliz.

It sucks that the fact that there is no Season 2 for ‘Deception’ I wish and hope that they can actually finish it and wrap it it up completely my older sister was very upset and she cried so much she admired this TV show and the thing that made me so upset is that my sister is in a very bad condition and she keeps asking where is the new season and I don’t want to tell her the truth about the second season canceling.

I absolutely LOVED, LOVED, LOVED this show! It was funny, creative, interesting. The cast were amazing and worked really well together.

Would I watch season 2? Most definitely!
I will probably watch season 1 again. I was so disappointed that this show was cancelled. Please bring it back!!!

Deception was a great show, we would love to watch the next season, please pay attention to viewers. it will definitely be a hit show. please do consider.

Why did you cancel Deception. It was a great show. Please pay attention to what we the viewer wants. Bring it back

I not only watched this show once, I watched it again and again. After the first show I could not wait for the next. It is witty, deceptive, fun. The magic is the best, especially the props and illusions to fool the bad guys. The lines are delivered at the right moments. Kudos to the writers and Kudos to the actors who execute the story . I thought the concept was very innovative! Please, Please bring the show and the cast back!!!!

I would have watched season 2 of deception, was a great show, much better then the reality shows

Found the show to be very entertaining especially when you can combine drama, comedy and romance so well

Surr cancel the good shows and keep all the crap!

Bring it back. Best show on TV. I love magic solving crimes.