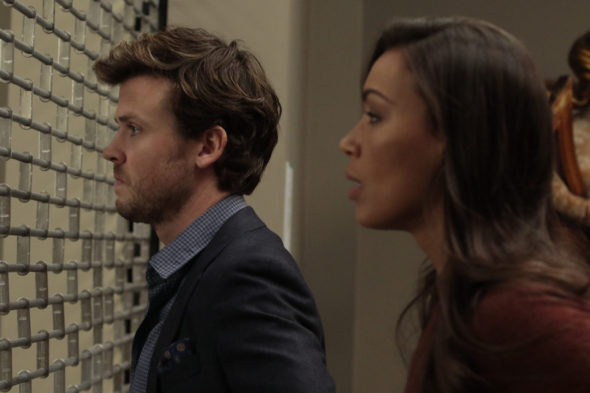 How enchanted are you by the first season of the Deception TV show on ABC? As we all know, the Nielsen ratings typically play a big role in determining whether a TV show like Deception is cancelled or renewed for season two. Unfortunately, most of us do not live in Nielsen households. Because many viewers feel frustration when their viewing habits and opinions aren’t considered, we’d like to offer you the chance to rate all of the Deception season one episodes here.

An ABC crime drama from creator Chris Fedaki, Deception stars Jack Cutmore-Scott as illusionist Cameron Black, with Ilfenesh Hadera, Lenora Crichlow, Amaury Nolasco, Justin Chon, Laila Robins, and Vinnie Jones. With big shows in Vegas and New York, Cameron is rocketing to the top, when scandal derails his show and his twin’s life. While watching the news, he realizes that the FBI has been deceived by an illusionist, who has stolen one of his signature moves. Now, this magician is using his tradecraft to help the Feds apprehend some of the most elusive criminals in the world and hopes to prove his brother, Jonathan (Cutmore-Scott), is an innocent man.

What do you think? Which season one episodes of the Deception TV series do you rate as wonderful, terrible, or somewhere between? Should ABC cancel or renew Deception for a second season? Don’t forget to vote, and share your thoughts, below.

Good show with a new and refreshing point of view on things. It’s nice to look at and unexpected. A second season would be great and welcome in these times. Reconsider a second season you would make a lot of people happy