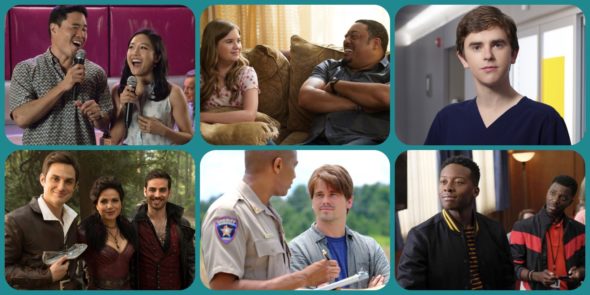 Every year, the ABC television network introduces new TV series, which are either cancelled or renewed by the season’s end. Likewise, among existing shows which were initially renewed and returned for another installment, there are always some under-performers that end up as the television vulture’s TV dinner du jour. Although everyone understands the Nielsen ratings usually play a big role in TV cancellations and renewals, most fans do not get to participate in that system. Since so many viewers’ opinions do not factor into the Alphabet Network’s programming decisions, we are offering you the chance to submit your own ABC TV show ratings to us, instead.

You can vote on the following ABC TV series that have premiered (so far) during the 2017-18 television season: $100,000 Pyramid, America’s Funniest Home Videos, American Housewife, American Idol, Alex, Inc, The Bachelor, The Bachelor Winter Games, Bachelor in Paradise, The Bachelorette, Black-ish, Castaways, Celebrity Family Feud, Child Support, The Crossing, Dancing with the Stars, Deception, Designated Survivor, For the People, Fresh Off the Boat, The Gifted, The Goldbergs, The Gong Show, The Good Doctor, The Great American Baking Show, The Great Christmas Light Fight, Grey’s Anatomy, How to Get Away with Murder, Kevin (Probably) Saves the World, The Last Defense, Marvel’s Agents of SHIELD, Marvel’s Inhumans, Match Game, The Middle, Modern Family, Once Upon a Time, The Proposal, Quantico, Roseanne, Scandal, Shark Tank, Speechless, Splitting Up Together, Station 19, Sundays with Alec Baldwin, Take Two, Ten Days in the Valley, To Tell The Truth, The Toy Box and What Would You Do?

What do you think? Which ABC TV series do you rate as wonderful, terrible, or somewhere between? If it were left up to you, which ABC TV shows would be cancelled or renewed for another season? Don’t forget to vote, and please share your thoughts, below.

I think this show is great. Please don’t cancel it. The shows that seem to not get cancelled are ones with violent content. Take Two is like a breath of fresh air.

season 2 has already been renewed It is a great show

When is season 2 of the good doctor coming out?

It hasn’t been renewed for a second season yet. Season one resumes 1/8/18.