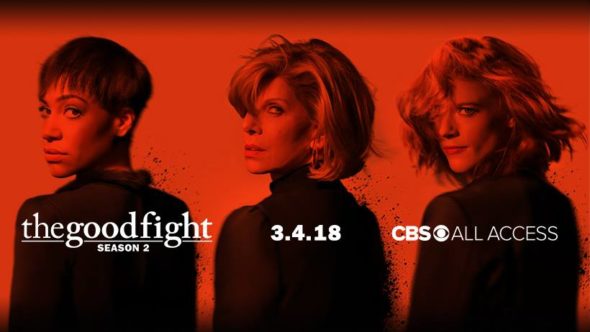 Do Diane and Maia fit in at Reddick, Boseman and Kolstad during the second season of The Good Fight TV show on CBS All Access? As we all know, the Nielsen ratings typically play a big role in determining whether TV shows are cancelled or renewed. CBS All Access and other streaming platforms, however, collect their own data. If you’ve been watching this TV series, we’d love to know how you feel about The Good Fight season two episodes. We invite you to rate them for us here.

A CBS All Access legal-political drama, The Good Fight stars Christine Baranski, Cush Jumbo, Rose Leslie, Delroy Lindo, Audra McDonald, Sarah Steele, Justin Bartha, Michael Boatman, and Nyambi Nyambi. A sequel to The Good Wife on CBS, the legal and political drama centers on Diane Lockhart (Baranski), her goddaughter Maia Rindell (Leslie), and Lucca Quinn (Jumbo). When a client at another firm kills his lawyer for over-charging, it inspires a copycat murder. Since Chicago’s murder rate is rising, the firm starts to eye its own clients, with fear and suspicion. Diana goes head to head with Liz Reddick-Lawrence (McDonald), a new partner. Meanwhile, her parents’ scandal has inspired Maia to be a bit tougher, and Lucca returns to someone’s orbit

What do you think? Which season two episodes of The Good Fight TV series do you rate as wonderful, terrible, or somewhere between? Should CBS All Access cancel or renew The Good Fight for season three? Don’t forget to vote, and share your thoughts, below.

Where/when does The Good Fight air? We saw it once and then never found it in our lineup again. 🙁

It airs on CBS all access which requires a monthly fee. You can normally get a one month free trial and it’s easy to cancel online. If you do that you are best to wait until all episodes air and binge watch.