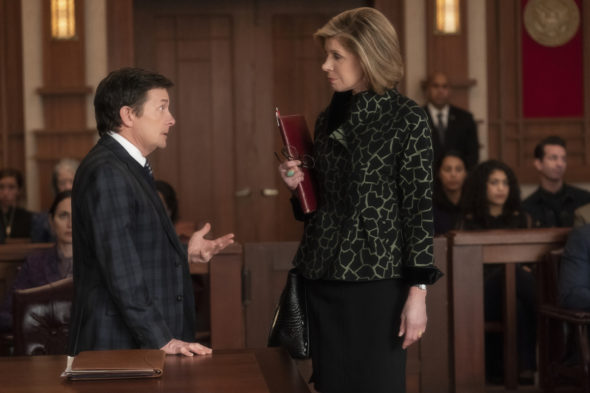 How will Diane and company cope with their new “overlord” in the fourth season of The Good Fight TV show on CBS All Access? As we all know, the Nielsen ratings typically play a big role in determining whether a TV show like The Good Fight is cancelled or renewed for season five. CBS All Access and other streaming platforms, however, collect their own data. If you’ve been watching this TV series, we’d love to know how you feel about the fourth season episodes of The Good Fight here. *Status update below.

A CBS All Access legal and political drama, The Good Fight stars Christine Baranski, Cush Jumbo, Audra McDonald, Sarah Steele, Michael Boatman, Nyambi Nyambi, Zach Grenier, John Larroquette, and Delroy Lindo, with Hugh Dancy recurring. A sequel to The Good Wife, the drama centers on Diane Lockhart (Baranski), Lucca Quinn (Jumbo), Adrian Boseman (Lindo), and others at the Reddick, Boseman & Lockhart law firm in Chicago. In season four, the firm is navigating a very different landscape. After they lost their biggest client, Chumhum, and their founding partner’s name was tarnished, the firm was forced to accept an offer by a huge multi-national law firm, STR Laurie, to become a small subsidiary. Suddenly, all of their decisions can be second-guessed by the giant firm that is literally on top of them. While STR Laurie initially seem like benevolent overlords, we find Diane and her colleagues chafing at their loss of independence while simultaneously investigating the emergence of a mysterious “Memo 618”.

What do you think? Which season four episodes of The Good Fight TV series do you rate as wonderful, terrible, or somewhere between? Do you think that The Good Fight on CBS All Access should be cancelled or renewed for a fifth season? Don’t forget to vote, and share your thoughts, below.

5/15/20 update: The Good Fight has been renewed for a fifth season on CBS All Access.