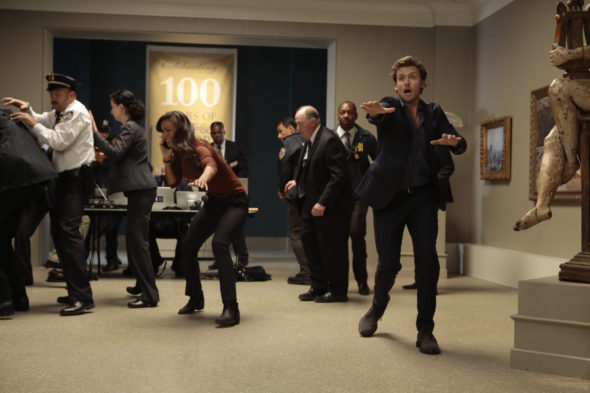 Can Cameron Black pull another rabbit out of his hat for the Feds? Has the Deception TV show been cancelled or renewed for a second season on ABC? The television vulture is watching all the latest cancellation and renewal news, so this page is the place to track the status of Deception, season two. Bookmark it, or subscribe for the latest updates. Remember, the television vulture is watching your shows. Are you?

An ABC crime drama from creator Chris Fedak, Deception stars Jack Cutmore-Scott as illusionist Cameron Black, with Ilfenesh Hadera, Lenora Crichlow, Amaury Nolasco, Justin Chon, Laila Robins, and Vinnie Jones. With big shows in Vegas and New York, Cameron is rocketing to the top, when scandal derails his show and his twin’s life. While watching the news, he realizes that the FBI has been deceived by an illusionist, and whoever it was stole one of his signature moves. Now, this magician is using his tradecraft to help the Feds apprehend some of the most elusive criminals in the world and hopes to prove his brother, Jonathan (Cutmore-Scott), is an innocent man.

The first season of Deception averaged a 0.71 rating in the 18-49 demographic and 3.51 million viewers. Find out how Deception stacks up against other ABC TV shows.

Will ABC cancel or renew Deception for season two? The ratings are pretty poor so, my gut tells me this one won’t survive. For now, I’ll keep an eye on the ratings and update this page with breaking developments. Subscribe for free alerts on Deception cancellation or renewal news.

What do you think? Were you hoping that the Deception TV show would be renewed for season two? Are you sorry that ABC cancelled this TV series, instead?

I want to watch Deception

Pity it was cancelled it’s entertaining and differnt to all the other violent and foul language programs on television. I for one am enjoying it on the Alibi channel in the UK. Consider that I am
Not alone in saying this.