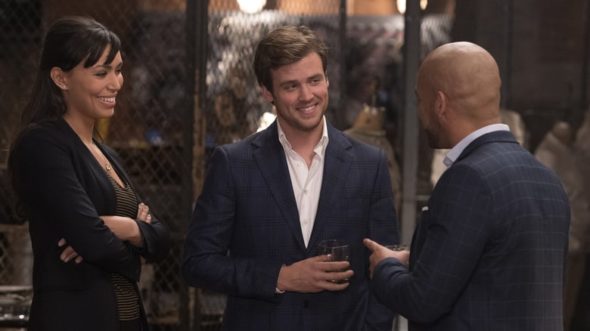 Tonight marks the end of ABC’s Deception TV show. The alphabet network decided to cancel the Sunday night drama series after just one season of 13 episodes. Why was it cancelled? Would you have watched a second season?

An ABC crime drama from creator Chris Fedak, Deception stars Jack Cutmore-Scott as illusionist Cameron Black, with Ilfenesh Hadera, Lenora Crichlow, Amaury Nolasco, Justin Chon, Laila Robins, and Vinnie Jones. With big shows in Vegas and New York, Cameron is rocketing to the top, when scandal derails his show and his twin’s life. While watching the news, he realizes that the FBI has been deceived by an illusionist, and whoever it was, stole one of his signature moves. Now, this magician is using his tradecraft to help the Feds apprehend some of the most elusive criminals in the world and hopes to prove his brother, Jonathan (Cutmore-Scott), is an innocent man.

Debuting on March 11th, Deception got off to a decent start with 1.20 rating in the 18-49 demographic with 5.93 million viewers. The show’s premiere ratings were likely helped by the fact that the first episode aired after the ABC debut of American Idol (which drew a much bigger audience).

Week two saw the ratings drop by more than 32% and the numbers kept dwindling downward as the season progressed. Last week’s episode attracted a 0.60 in the demo with 3.18 million.

With ratings like these. it was no surprise that ABC decided not to order a second season. Unfortunately, filming had already been completed before that decision came down so the writers didn’t have time to wrap things up.

Though the show’s ratings were low, Deception clearly has some devoted fans who wanted the show to continue.

What do you think? Did you like the Deception TV show? Would you have watched season two? Do you think that this show could have been a hit or, was it not made for a broad audience?

I hope this series continue, especially during the lock down. Well you could make good use of everyone being bored to make this a sell out it was absolutely meant to be. Please make the season 2

Undoubtedly this is one of the series…. eagerly waiting for season 2… could not longer….

It is sad that creative and original shows are not promoted as much as some re-makes and therefore have to rely on word of mouth. Not to forget that day and time of airing is not to be underestimated. Additionally I do agree: when a show is sold internationally those ratings have to be taken into account as well. (Including delay in airing. The show aired in spring 2018 in the US, rest of the world had to wait a little longer – by then ABC had already cancelled it) To answer the question – yes, I most definitely would… Read more »

This show is no doubt one of the best series I have watched. Now I’m just waiting for season 2

I loved this tv show . I just wonder when I realized they are not coming to make the continiue of this tv show …… It was exciting and made me corious about next episode … and I watched all of it …… , it will be good if they continiue this and for other seasons we see Janaton and Kameron working togheter …. it can be very long tv show with several seasons ….it just need time to people know about this existing….Its about two weeks since I know this tv show…I hope they continiue this…

I loved this show it was fresh, intriguing, clever, clean. Every thing we like our entertainment to be. So sad to find out it was cancelled. I would love to see season 2 on Netflix or Prime

This is my favourite series ever, I love it there must be a second season, this is one of the best series, enjoyed every episode and would watch it again. South Africa just finished season 1 and need the second one

Love it man, i really love it this shows its different from other shows im watching not every time u can see show like this. Oh man im really dissapointed

The show was amazing, i honestly have no idea why the show was cancelled , the show should start again. like how do you end a season after such a dramatic cliff hanger at the end of the season the best they could have done is at least add a couple episodes to wrap things up , my mind is still in shock to be honest.

I am from Geemany and i watched every episode i can‘t believe this show is cancelled. Why does only the USA rating count i mean there a lot of people who watch this show. I hope that this show is gonna be saved by netflix or something like that. Maybe there is a chance for season 2 i mean they did save Lucifer too why not this show it would worth it. It can‘t end like this

I’m writing from France. Deception has been sold to many countries around the world and it has big fan base and ratings in Europe. I don’t understand why you cancel such a great show just based on USA ratings? you can still make money by selling the season 2 all around the world. Frankly the show was great and the twists genious. Some other TV station MUST buy the rights and make the Season 2! Please bring it back or at least finish the story!

Why would such a great show be canceled? I have watched Series 1 more than a dozen times now. Revive it or move it to another channel. Or create a movie to at least let us know what will happen to Cameron being back in the can! Who will help him etcetera. Series 1 was excellent! Continue please.