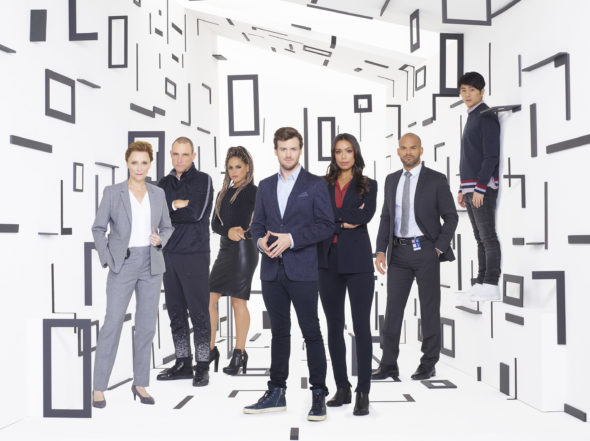 TV show description:
From creator Chris Fedak, the Deception TV show centers on illusionist Cameron Black (Cutmore-Scott). With big shows in Vegas and New York, this magician is rocketing to the top, when scandal derails his show and his drive.

Unbeknownst to the world, Cameron has a twin brother, Jonathan (Cutmore-Scott), who is integral to both his magic and his life. Then one night, Jonathan is framed for murder. Soon, their secret is revealed, and Jonathan is convicted. Cameron is certain another illusionist is behind the crime.

With his career on hold and his mind overwhelmed by guilt and the desire to exonerate his brother, Cameron won’t even work with his team to develop a new act. One day though, while watching the news, he realizes that the FBI has been deceived by an illusionist, and whoever it was stole one of his signature moves. Now, Cameron is using his tradecraft to help the Feds apprehend some of the most elusive criminals in the world and hopes to prove his brother is an innocent man.

Series Finale:
Episode #13 — Transposition
The Deception team goes up against the Mystery Woman in a battle of dueling deceptions. But just when Cameron thinks he finally has her, she unleashes her most game-changing twist yet.
First aired: May 27, 2018.

What do you think? Do you like the Deception TV series? Should this TV show have been cancelled or renewed for a second season on ABC?

This is a super tv siries why is canselled.. plzz give us season 2

I actually enjoyed the show a lot. Upset it was canceled. It was fun and different than all the other shows. I had several friends as well whom watched it and were surprised it was canceled. Seems like all the shows on t.v. are practically the same I don’t understand anything new and different always seem to get canceled. Happens all the time.

Renewed for sure We were left hanging

Deception should definitely be renewed for season 2

Please please please bring it back! It was so good, original, and I need to know what happens next!!!!

This show was spectacular! Please bring it back!!!