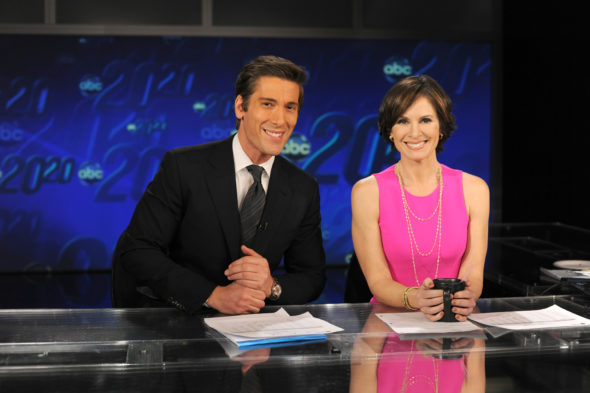 What’s the news? Has the 20/20 TV show been cancelled or renewed for a 41st season on ABC? The television vulture is watching all the latest cancellation and renewal news, so this page is the place to track the status of 20/20 season 41. Bookmark it, or subscribe for the latest updates. Remember, the television vulture is watching your shows. Are you?

When a show gets to its 40th season, its very existence provides the network with a certain cachet. Also, because news magazine shows are less expensive to produce than scripted programming, the Alphabet Network’s expectations are different. Since the 20/20 ratings dropped quite a bit between seasons 38 and 39, a cancellation isn’t out of the question, but it is still unlikely. ABC is far more likely to tinker with it (think: change up the anchors, shake up the content and format) than to cancel 20/20 outright. I expect 20/20 will be renewed for season 41. For now, I’ll keep an eye on the Nielsens and update this page from time to time. Subscribe for free updates on any 20/20 cancellation and renewal news.

What do you think? Are you glad that ABC renewed the 20/20 TV show for a 41st season? How would you feel if the network had cancelled this TV series, instead?

I really enjoyed 20/20 & have for many years. I hope it’s renewed for the next season.