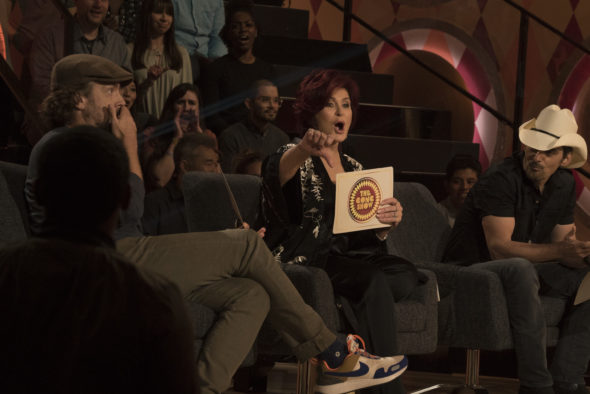 Has the gong sounded? Is The Gong Show TV show cancelled or renewed for a third season on ABC? The television vulture is watching all the latest cancellation and renewal news, so this page is the place to track the status of The Gong Show, season three. Bookmark it, or subscribe for the latest updates. Remember, the television vulture is watching your shows. Are you?

Airing on the ABC television network, The Gong Show is a wacky talent competition. Season two celebrity judges include Will Arnett, Fred Armisen, Rita Wilson, Tony Hale, Regina Hall, Jason Sudeikis, Sharon Osbourne, Brad Paisley, Dana Carvey, Ken Jeong, Rob Riggle, Alyson Hannigan, and Jimmy Kimmel. Performers with unique talents face off in hopes of impressing the rotating panel of three celebrity judges. When a judge determines an act does not deserve a score, he or she can grab the mallet, strike the gong, and eliminate the contestant, provided fellow judges don’t prevent it. When an act pleases the judges, they will award it between 0 and 10 points. At the end of each episode, the performer or act with the highest score wins The Gong Show trophy and a check for $2,000.18.

The second season of The Gong Show averaged a 0.49 rating in the 18-49 demographic and 2.81 million viewers. Compared to season one, that’s down by 28% in the demo and even in viewership. Find out how The Gong Show stacks up against other ABC TV shows.

Will ABC cancel or renew The Gong Show for season three? The ratings are quite low but I suspect that the network will bring the series back for a third year. I’ll keep an eye on the ratings and update this page with breaking developments. Subscribe for free alerts on The Gong Show cancellation or renewal news.

Update: ABC has presumably cancelled The Gong Show so there won’t be a third season of this revival, at least for now.

What do you think? Were you hoping that The Gong Show TV show would be renewed for season three? Are you sorry that ABC cancelled this TV series, instead?

Best program for quality & shock I’m 30 years. The people who didn’t watch the second season was THEIR loss. I laughed till I cried. WTF were they thinking canceling this show.

Best bring back show I’ve ever, ever, ever seen. Hands down. No one else close.

Want to see the gong show come back for a third season. It is funny to what and the host is great. We need some stupidity in our lives, with the way the past six months have been!

I absolutely made sure I didn’t miss any airings of The Gong Show. For one, it’s real people with a twist. And you never know what’s next. The Gong cast was always entertaining and the MC was insanely creative….. Again, you never knew what was next. It never failed to lift my spirits. Pleeeeease bring it back!

There are not many fun verity shows out there anymore so the loss of the Gong Show is just another stab in the back to the people who need comedy and silliness. The current, irritating sitcom’s seem to somehow survive while the Gong show, which is advertising for small time acrobatic acts and comedians, is on the chopping block. Those people need some sort of exposure on the big stage. Bring back the show … the show must go on!