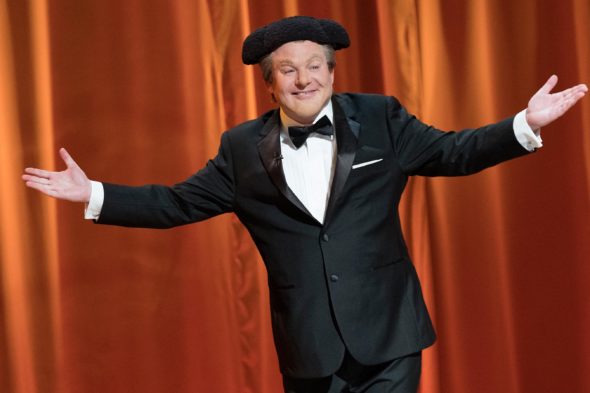 Get ready for The Gong Show. This week, ABC announced the TV show’s second season will premiere in June.

Hosted by Tommy Maitland (Mike Myers), the series features performers with unique talents who face off in hopes of impressing a rotating panel of three celebrity judges. Previous judges have included Will Arnett, Andy Samberg, Alison Brie, and Anthony Anderson.

Season two of The Gong Show premieres on ABC on June 21st at 8 p.m. ET/PT.

“The Gong Show,” which is executive produced by actor/comedian Will Arnett, is set to make its triumphant return to ABC on THURSDAY, JUNE 21 (8:00-9:00 p.m. EDT). Celebrated film and television actor/comedian Mike Myers stars as the show’s host – British comedic legend Tommy Maitland.

The iconic and irreverent talent show competition makes its way into the 21st century with a bang, celebrating unusually talented and unique performers on a primetime stage. A revolving panel of judges featuring Hollywood’s biggest stars praise, critique and gong contestants in this revival of one of TV’s all-time great variety shows. This summer, Will Arnett returns as a celebrity judge. Most performers will go home with their unique talent that only a mother can love, but each week, the winning act with the highest judges’ score will receive “The Gong Show” trophy and a check. This season promises to bring in even more big-name judges and a new gaggle of contestants who are unafraid to showcase their awesome yet quirky routines.

NO. I think it’s so different from the original and I do not like this one at all.

No…The original Gong Show years ago was no good, so I haven’t tried this version. Doubt it would be worth my time either.

YES I have seen every ep of season 1, and loved it! I was a fan of the hilarious original 30 min Gong Show way back about 40 yrs ago. The new GS kind of just vanished far too soon. I was wondering when or even if it would ever be back. So glad to hear it will. Thanks ABC for keeping it around at least one more season! PS – Hope to see Mike Myers back again, and do keep the shaving cream song too, lol!