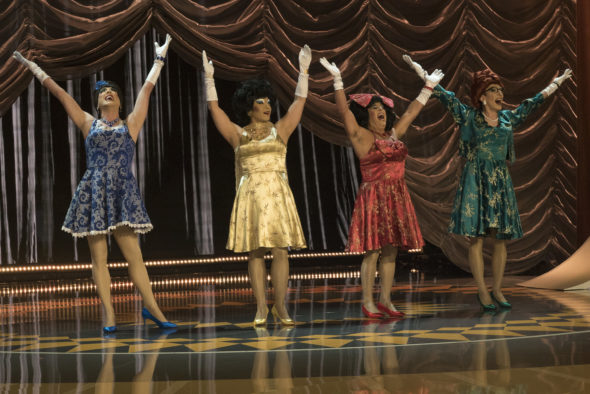 Will you give the gong to the second season of The Gong Show TV show on ABC? As we all know, the Nielsen ratings typically play a big role in determining whether the TV series The Gong Show is cancelled or renewed for season three. Unfortunately, most of us do not live in Nielsen households. Because many viewers feel frustration when their viewing habits aren’t considered, we’d like to offer you the chance to rate all of The Gong Show season two episodes here. *Status update below.

Airing on the ABC television network, The Gong Show is a wacky amateur talent competition, hosted by “British comedic legend Tommy Maitland” (Mike Myers). Season two celebrity judges include Will Arnett, Fred Armisen, Rita Wilson, Tony Hale, Regina Hall, Jason Sudeikis, Sharon Osbourne, Brad Paisley, Dana Carvey, Ken Jeong, Rob Riggle, Alyson Hannigan, and Jimmy Kimmel. Performers with unique talents face off in hopes of impressing the rotating panel of three celebrity judges. When a judge determines an act does not deserve a score, he or she can grab the mallet, strike the gong, and eliminate the contestant, provided fellow judges don’t prevent it. When an act pleases the judges, they will award it between 0 and 10 points. At the end of each episode, the performer or act with the highest score wins The Gong Show trophy and a check for $2,000.18.

What do you think? Which season two episodes of The Gong Show do you rate as wonderful, terrible, or somewhere between? Should The Gong Show be cancelled or renewed for a third season on ABC? Don’t forget to vote, then share your thoughts, below.

*Update: ABC has presumably cancelled The Gong Show so there won’t be a third season of this revival, at least for now.

Love the show with all its wackiness! Don’t cancel it.

I love The Gong Show and I would want to see it aired for another season. If it’s cancelled,
I’ll be extremely disappointed.

Please focus on the acts not to judges. The contestants should haven most of the air time not to judges.It looks pretty stupid when the contestants who are really doing all the action are only receiving less than 1/3 of their time. Compared to the panel of judges where they are getting most of the time on the camera. This is not what a gong show was about before that years ago. If they can correct this problem the ratings will go higher. Otherwise the Ratings will keep dropping.And those of us that don’t want to show to be canceled… Read more »

My husband and I love the Gong Show!! Please do not cancel. And just like Pam said we want the Sing along guy back!,