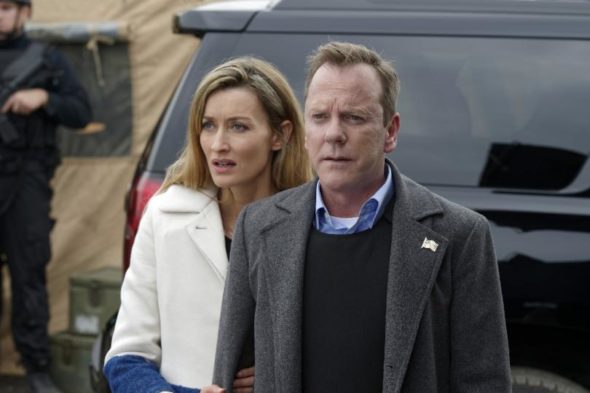 What’s going on with Designated Survivor? The freshman ABC series will return in March but with a new showrunner, says The Hollywood Reporter.

In December, the showrunner of Designated Survivor was replaced for the second time. First, Jon Harmon Feldman took over for Amy Harris. And now, Army Wives veteran Jeff Melvoin will be showrunner. However, despite the changes, the series is still performing fairly well in the ratings. So far, Designated Survivor is earning an average rating of 1.45 in the 18-49 demo with 6.59 million viewers. The real test will come when we see how many viewers remember to tune in when the series returns.

Season one of Designated Survivor returns on ABC on March 8th at 10 p.m. ET/PT.

What do you think? Are you watching Designated Survivor? Do you hope ABC renews the series for a second season?

I love this show! Been watching reruns on Netflix, and still hoping it will return. It is INMO, one of the best shows ever to be on television. The cast is great. Always love Keifer Sutherland. He is great in this role. Hoping it returns with original cast. This show is a keeper!

Yes, I look forward to seeing the show again. However, I think the writers have missed a great opportunity to expand its content. In my opinion, one of the reasons This Is Us is so popular is because we get to know each of the characters and how they relate to each other. Instead of killing off the wife and daughter, their stories should have been told. I can’t even remember what happened to the rebellious son.

I’m thrilled Designated Survivor will return on March 8, 2019. I have the date on my calendar and am anxiously awaiting the first episode. I LOVE THIS PROGRAM!

Can’t wait for show to come back!! Enjoyed it immensely!!!

One of my favorites… can not wait for the return…

This was an excellent show. Can’t wait to see more of it.

This was an excellent show, I loved it and have watched reruns whenever they are available. This by far was the best show they ever had. DO NOT understand WHY it is not a regular to return each season. INSTEAD they leave “the view” on and it is the worst show on tv.

I thoroughly enjoy the show! I’ve been waiting for it to return. I’m disappointed that two characters are missing. The president’s wife is dead and there’s no mention of the older daughter. Please keep it on air.

I agree. This is a GREAT SHOW! Not sure what ABC doesn’t get. Bring them all back. Keifer Sutherland has done a GREAT job giving us a production similar to the former West Wing!!

Yea I really dig the program…

YES YES YES, this is the most realistic and exciting series we have had the pleasure to enjoy. One problem….wish it ran all year, its seems like when it returns in March, its so darn long away, BUT well worth the wait. NO, other show could take it’s place.