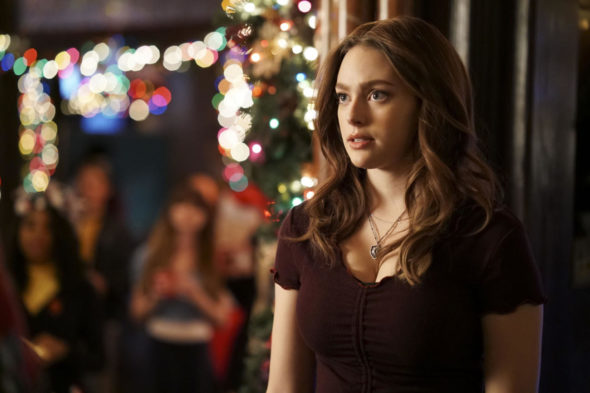 Class isn’t being dismissed. The CW has renewed the Legacies TV show for a third season which will air as part of the 2020-21 broadcast network season.

The Legacies TV show stars Danielle Rose Russell, Jenny Boyd, Kaylee Bryant, Quincy Fouse, Aria Shahghasemi, Peyton Alex Smith, with Matt Davis. A spin-off of The Originals (which is a spin-off of The Vampire Diaries), this show is set in the Salvatore Boarding School for the Young and Gifted in Mystic Falls, a haven for supernatural beings to learn to control their impulses and abilities. Typically a school for vampires like MG (Fouse), werewolves like Rafael (Smith) and witches like twins Lizzie (Boyd) and Josie (Kaylee Bryant), the kids and their beloved headmaster Dr. Alaric Saltzman (Davis) were stunned to come face to face with a series of monster and creatures they had only ever heard of in myth and lore — a dragon, a gargoyle, and the Headless Horseman. The evil behind the real-life resurrection of these formerly fictional beings proved to have a horrifying connection to the school’s newest student, Landon (Shahghasemi). This led his first and only love, Hope (Russell), the school’s shining star, to sacrifice her place at the school — and in the world — to protect Landon from a terrible fate. In season two, Hope tries to find her way back to the school she has learned to call home and the friends she has learned to love like family.

The second season of Legacies is averaging a 0.26 rating in the 18-49 demographic and 846,000 viewers. Compared to season one, that’s down by 15% and 16%, respectively. Airing on Thursday nights, Legacies is The CW’s sixth-highest rated show in the demo and ranks fifth in viewers.

What do you think? Do you like the Legacies TV series? Are you glad to hear that it’s been renewed for a third season?

Love the series and this show.

great show was worried they wouldnt bring it back like they have so many other great shows.. but dont understand why they are starting season 3 before airing the last of season 2? at least thats what it sounds like to me…

Happy this show has not been canceled.

It’s a great show. But Penelope needs to come back as Josie’s love interest. They were a big reason for more people tuning into the show.

I love this show please don’t cancel it’s refreshing to see. I so sick of all the cop and drugs show. this to me is entertainment.

I ‘m so happy it’s coming back I love it it’s a gr8 show and hope we’ll have many more season to come!

So glad to hear it. It’s the only decent show the CW has left. So tired of superheroes!!

So glad it is coming back for season 3