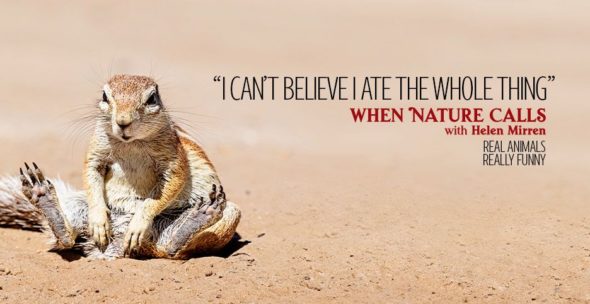 TV show description:
A comedy series based on a BBC format, When Nature Calls with Helen Mirren is a documentary examination of the animal kingdom that looks at the lighter side of the natural world. Narrated by Mirren, the show features comedians putting words into the mouths of beautiful beasts, teeny-tiny frogs, beatboxing badgers, and more in beautiful footage from all over the world.

What do you think? Do you like the When Nature Calls with Helen Mirren TV show? Do you think it should be cancelled or renewed for another season?

We love the show. It’s fun, typical British humor, and on a par with Monty Python and Fawlty Towers. Please don’t cancel it.

I can’t stand that show. It’s extremely racial and very sexually derogatory. It is a disgrace to Nature and children shows alike. It should be cancelled hands down. It’s obvious the show was intentionally designed to take stabs at people with very hurtful sexual jokes. The sexual jokes are the most hurtful anyway. End of story.

Should be cancelled. Very disjointed, no point to anything. The gags aren’t even funny! Can’t believe Helen Mirren got involved in this project.

Really cute show, totally different than anything on tv !!! I hope it stays on !!!!

I love the show…. it was really funny!!

Show should be cancelled. Perverted program not suitable for anyone

What is wrong with you? It was cute and funny , trust me , now days young kids are saying and knowing more than you can imagine!!!!

I mildly liked this show. Interesting how some of the comments complained about the vulgarness of the show. But yet it’s ok for a sitcom to have the same vulgarness???? Hummm. It’s a nice change from all the stupid sitcoms. My husband and I saw a similar show on a Princess Cruise a few years ago. It was not narrated, but it was hilarious. Was hoping this was the same or similar show. Will keep watching it.

WHEN NATURE CALLS show : VERY disappointing to all of us. Shouldnt have animals humping.Kids don’t need to see that! The “talking/comments” for them were NOT funny as made out it would be in ad. You need NEW writers that are comics or someone with good sense of humor. Boring. We turned it

The photography is beautiful but that is where the appeal ends. It discredits nature with the sophomoric inappropriate narration. I won’t recommend this show or watch it again. If you insist, try it with the volumn muted.

I like Helen Mirren, don’t get me wrong! But I can’t believe she condones the vulgar innuendoes in this series! At one point during the large cat family’s interaction the cubs are describing the inconvenience of interrupting mom with her battery operated banana! Are you kidding me? And that’s not the worst! It was just the last straw! This series has little redeeming quality and should be stopped..children do not talk like this and certainly not animals!!