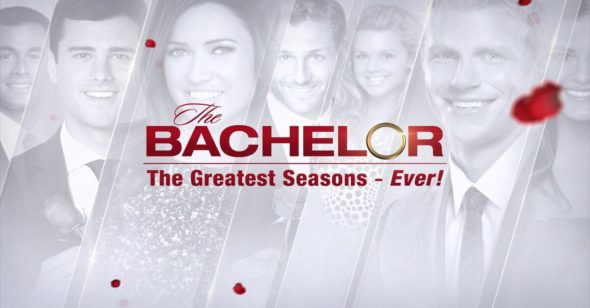 TV show description:
A retrospective TV series, The Bachelor: The Greatest Seasons – Ever! takes a look back at the memorable moments from more than 18 years of The Bachelor and The Bachelorette reality series.

Episodes follow past participants on their journeys to find love, giving audiences a chance to revisit the first-ever rose ceremony, watch rarely seen outtakes, and be reintroduced to some of Bachelor Nation’s unforgettable men and women.

Host Chris Harrison reaches into the vault and brings back one of his favorite seasons, highlighting the most notable moments from The Bachelor franchise. Episodes also include virtual catch-ups with returning Bachelors and Bachelorettes, as well as fan-favorite cast members from each season.

Series Finale:
Episode #10 — Juan Pablo Galavis
Juan Pablo, the charming soccer player and single dad from Venezuela went from being the sexiest man alive to one of the most controversial Bachelors in franchise history. Simultaneously, Bachelor Nation was introduced to Clare Crawley. Her search for love with Juan Pablo not only changed her life but promises to make her own romantic journey to find her soul mate a memorable one. Chris Harrison will chat with trailblazing Bachelorettes Trista Rehn Sutter and Kaitlyn Bristowe, plus Andi Dorfman, DeAnna Pappas-Stagliano and Becca Kufrin, who will look back at this season and celebrate Clare’s upcoming quest for her happy ending.
First aired: September 7, 2020.

What do you think? Do you like The Bachelor: The Greatest Seasons – Ever! TV show? Do you think it should have been cancelled or renewed for a second season?

Just more crying and high school girls…..no thank you !!! I don’t know where you come up with these people…why don’t you do a more mature show !?!?

Who watches this? It’s all set up by the producers… duhhhhh

I don’t watch it and never will

I’m apart of the Bachelor Nation so I definitely want to see another episode, especially since we can’t get the Bachelorette this year and Bachelor in Paradise.