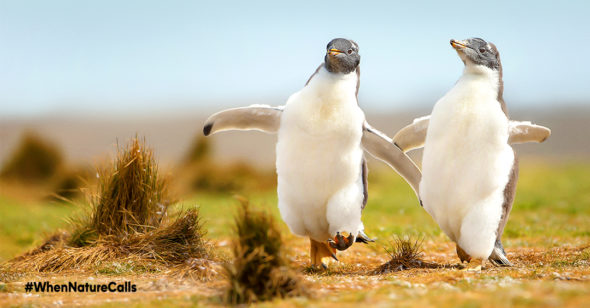 Who will be the (comedy) king of beasts in the first season of the When Nature Calls with Helen Mirren TV show on ABC? As we all know, the Nielsen ratings typically play a big role in determining whether a TV show like When Nature Calls is cancelled or renewed for season two. Unfortunately, most of us do not live in Nielsen households. Because many viewers feel frustrated when their viewing habits and opinions aren’t considered, we invite you to rate all of the first season episodes of When Nature Calls here.

An ABC comedy series based on a BBC format, When Nature Calls with Helen Mirren is a documentary examination of the animal kingdom that looks at the lighter side of the natural world. Narrated by Mirren, the show features comedians putting words into the mouths of beautiful beasts, teeny-tiny frogs, beatboxing badgers, and more in beautiful footage from all over the world. Comedic scenarios include a field mouse who is killing it with NFTs, a divorced bear gym teacher whose students have heard gossip about his private life, a dragonfly movie star who can’t take direction, a beetle named Tony with anger management issues, a supermodel lemur, a thousand-year-old fairy fish trying to find someone who wants to make a wish, the new hit game show “Wolf or Rock”, and a crab who writes erotic fiction.

What do you think? Which season one episodes of the When Nature Calls with Helen Mirren TV series do you rate as wonderful, terrible, or somewhere between? Do you think that When Nature Calls should be cancelled or renewed for a second season on ABC? Don’t forget to vote, and share your thoughts, below.

I laughed so hard (most of the time) I watched some scenes over & over (others I would fast fwd) I love Helen’s commentary & voices! It is Not your typical animal or National Geographic show…. But that’s why I loved it. The filming is beautiful, nature is magnificent, and I did learn things. The names of all the animals are not mentioned by The narrator, so it Would be a nice addition for there to be a list in the post credits or underneath the scene w subtitles or something that actually tells you the name / type of… Read more »

This show is silly and terrible show. I would hope to learn about our natural environment. The recordings are educational. Provide facts about the videos not useless so-called comedy. Nature, God’s green earth is not comedy. Present facts, not make believe. Take notes from “earth’s odessy”

When nature calls has beautiful filming and the most amazing pictures of animals in the habitat..I highly recommend that the narrative s stop..they are bad !! And distracting. The narratives are going to kill your show. Honestly..the statement are stupid!and seriously need to stop!!!!!!

This is such a let down. My grandkids and I so looked forward to this beautifully photographed story of animals and nature. We were not expecting the animals to talk, get drunk, be judgemental, and posess so many ugly human traits. I still do not understand the need to bleep the pretend cussing. You ruined this beautiful show, and our chance to watch some quality tv with family. Thanks

Maybe just watch it w the sound off. There are tuns of animal documentaries

I thought it was great, funny and beautiful photography as did my friends, it wasn’t given enough of a chance.

I love this show. So much better than scantily clad boohooing women try to get an arrogant man and new game shows with screaming contestants. This is a breath of fresh air

Laughed out loud. This was a nice twist on all of the stupid sitcoms with laugh tracks. Don’t care that it isn’t truly a ‘nature’ show …… liked the irreverence in the characters – yes, not what I was expecting but happily surprised!!

So not what I was expecting. This needs to be a show explaining about the animals and their behavior. Should focus on one animal at a time and talk about the specific animal and why they do what they do, etc. The people talking for the animals is corny and stupid. This is not a nature show that I was expecting. This is more for kids without the bleeping of bad words. Should’ve been a cartoon show. So disappointed! Don’t think it will last very long.

Every single nature documentary is exactly like you’ve explained this one should be and there is a multitude of them, I know because I watch them all. I enjoyed this one because it’s different, it’s not for kids, it’s got adult humor and perhaps because it’s not what I expected, I found myself enjoying it even more.