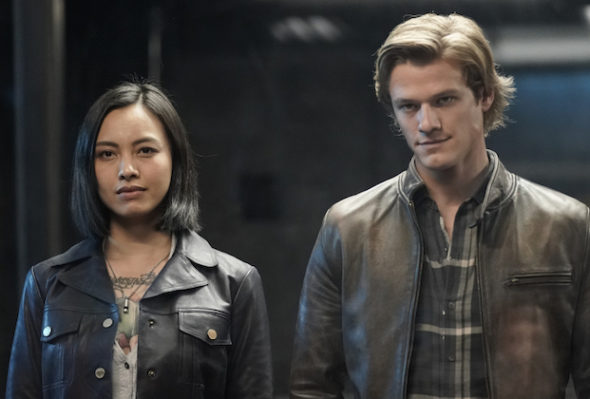 Magnum PI fans will see a former MacGyver star appear on the CBS series this March. Levy Tran (pictured above left, with Lucas Till) will guest star in an episode as a “powerful crime lord’s formidable bodyguard.”

TV Line revealed the following about her role on the CBS series:

“While loyal to her boss, Min abides by her own code (and harbors a secret agenda). Circumstances will force Magnum to work with Min when his interests coincide with her employer’s.”

Tran was a series regular on two seasons of the MacGyver reboot before that show ended in April 2021. Its Friday night timeslot was taken over by the reboot of Magnum PI which returns from its winter hiatus on January 7th.

What do you think? Are you excited to see Tran appear on Magnum PI on CBS?

A good storyline is what the new Magnum PI series always delivers regardless of the guest star.

I love magnum and I also loved macguyver. I think she’ll be great!!

Tran should be her character from
5-O

Never been a fan of the show. Nothing against Hawai’i but their shows do nothing for me. The new NCIS Hawai’i is like a wet lettuce and totally unwatchable.

I watch the show all the time. We’ll see how the writers are going to do this.

I didn’t like her on Macgyver. That show went downhill when she joined. Not her fault, but she was part of what the writers did to ruin that show.

Oh, hell yeah! She is an amazing actress! Kinda wish she would reprise her Macgyver role though, especially since Magnum PI takes in the same Universe as the former. But LOVE her regardless…