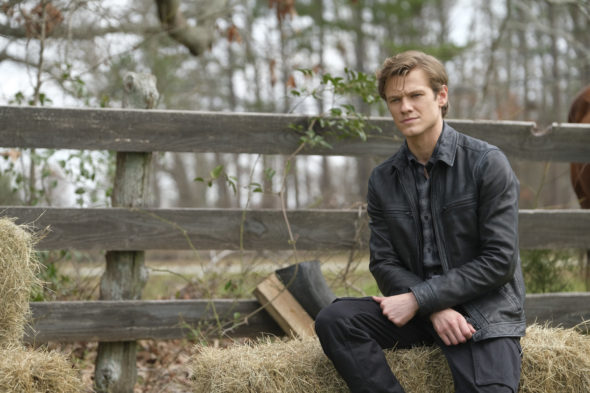 MacGyver has made some additions to its cast for the current fifth season. Alexandra Grey is joining the CBS series in a recurring role, and Ernie Hudson and Wendy Raquel are also joining the series in guest-starring roles, as Bozer’s parents.

Lucas Till (above), Tristin Mays, Justin Hires, Meredith Eaton, Levy Tran, and Henry Ian Cusick star in this series which is a reboot of the popular Richard Dean Anderson series from the 1980s.

Deadline revealed the following about Grey’s role on the CBS drama:

“She will play Parker, a transgender female Phoenix engineer who has been tapped by director Matty Webber (Meredith Eaton) to provide critical assistance to MacGyver and the Phoenix team. Whether it be cracking cyphers to solve a case or lending a supportive ear when needed, Parker has their back. Her episodes will begin airing March 12.”

As for Hudson and Raquel, the pair will appear in an episode set for April, and they will give MacGyver and his team a mystery to solve. TV Line revealed the following:

“Mac and Desi go with Bozer back home when his mother’s best friend dies in a tragic accident. But soon after arriving there, they realize that the woman’s death may have been murder, and the city’s contaminated water supply holds the key to finding the killer.”

MacGyver has not yet been renewed for a sixth season by CBS. The drama currently airs on Friday nights.

What do you think? Are you excited about these additions to the cast of the MacGyver TV series on CBS?

The show just isn’t the same as when it started, too much nothing going on….has totally lost the MacGwyver story….dump it.

I prefere MacGyver and Riley together but still like the show and it should be renewed. I just hope the show isn’t ruined by the guest actors. The original Macgyver is still my favorite but I do like the new one

We love MacGyver, but want MacGyver and Riley together !!!!

Is there any significance to the ousting of PLenkov and, there being more than one Black actor cast in an episode? Don’t get me wrong. Occasionally on Hawaii Five-0, Grover had “family and/or friends” on the show. But, it was so infrequent! Or, is CBS trying for political correctness, after all these years?

I liked the original much better. Now it’s let’s solve a problem by hacking into the computer system in less than a minute. The old show Mac solved 100% of the problems now he depends on his team to support him 50% of the time. Writers need to be more creative on the current show.

I live the new additions. It gives a new prospective. I would miss the show because I have been in a fan from the beginning.

Please continue with MacGyver, its a shame Jack (George Eads) has gone for good. What about Mac and Jack’s buddies Dalton’s Heroes should get together in an episode to remember Jack. I would like to see Mac and Riley get together in the future.
I have one more question….. Who’s house is Mac and Bozer living in???? In some episode’s Bozer says the house belongs to his family and other episodes Mac has stated the house belonged to his grandfather????

I love the show. But I started watching it cause George Eads (Jack) was on it. I want him back on the show. I have followed all his characters. Please think about it.

If you like biting your nails while sitting on the edge of your seat with your heart pounding out of your chest, renew the show!! But as for guest appearances don’t make them permanent(sp??)

This is one of my abso faves, love the update/facelift from the 80s (very bad) version. This news is icing on the cake.

Cool, to have a transgender person on Macgvyer, and Ernie Hudson is a good actor. Good people coming on the show.