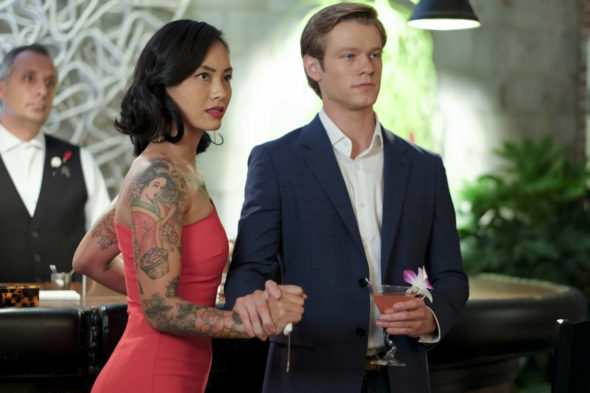 How many ways will Mac save the world in the fifth season of the MacGyver TV show on CBS? As we all know, the Nielsen ratings typically play a big role in determining whether a TV show like MacGyver is cancelled or renewed for season six. Unfortunately, most of us do not live in Nielsen households. Because many viewers feel frustration when their viewing habits and opinions aren’t considered, we invite you to rate all of the fifth season episodes of MacGyver here. *Status Update Below.

A CBS action-adventure series, MacGyver stars Lucas Till, Tristin Mays, Justin Hires, Meredith Eaton, Levy Tran, and Henry Ian Cusick. A reimagining of the 1985 TV series, this show centers on Angus “Mac” MacGyver (Till), a 20-something adventurer. Mac is an operative in a secret organization within the US government called the Phoenix Foundation. There, he uses his vast scientific knowledge and an extraordinary talent for unconventional problem-solving to save lives. In his high-risk missions, Mac is aided by hacker Riley Davis (Mays); Mac’s best friend, prosthetics expert Wilt Bozer (Hires); Director of Operations Matty Weber (Eaton); the team’s protector, Desi Nguyen (Tran); and Russ Taylor (Cusick), a quick-witted former military operative and manipulator. Under the aegis of the Phoenix Foundation, MacGyver takes on the responsibility of saving the world, armed to the teeth with resourcefulness and little more than bubble gum and a paper clip.

What do you think? Which season five episodes of the MacGyver TV series do you rate as wonderful, terrible, or somewhere between? Do you think that MacGyver should be cancelled or renewed for a sixth season on CBS? Don’t forget to vote, and share your thoughts, below.

I love MacGyver got really into this show very fascinating what gadgets he can do with to make something out of. I want more to watch I just can’t get enough please bring more series of this show I hope they decide to bring it back for more fascinating stuff.

The original was not very good. This one is terrible.

Please Do Not Cancel MacGyver! The show is entertaining and we learn something different every week. Great show and a Great cast! Please Bring the Show back! Please, Please! Do not Cancel. Peace, Marc

MacGyver should be renewed!! It is a great show that showcases the beauty of science.
#SaveMacGyver

You should never have taken this off the air. It is a lot better the the old one. You should bring this MacGyver back. It is more realistic then the old one. I for one hated the old one. It was in on why realistic. You guy are are so dumb it is unreal. You always take off the best shows. All you people care about is the money. You do not care about want people like. Look at Supernatural. They had very low ratings but they still stayed on for 15 years. Wake your buts up and bring back… Read more »

MacGyver will be missed. I hope another network or streaming service will keep it going. If not, I hope the writers who add jokes to the location-setting printouts in the left corner find similar gigs. That was a fine, unique perk of the series.

I enjoyed MacGyver and think that it is a shame to cancel it. I believe if the writers had continued with the original concept of The Phoenix as a separate entity (not connected to the government), they viewership would have stuck around, but they made everything too complicated, Codex for example and just confused the heck out of everyone.

I look forward to every Friday night. Then came the late start to season 5. What did i do? I went back and watched season 1-4 again. Then again. Friday night is my favorite night. I also love blue bloods. Macgyver has it all. Its action packed. Its funny in its own way. They keep you coming back for more. I do have to admit 1 reason i watch is for Riley. She is a great and very beautiful actress. I even name my daughter Riley. Please renew

You are all on drugs. Why do you always cancel the good show? If I had the money I would take over the show and keep it on TV. But the little guy never has the say.

I love Macgyver. It is very good. dont cancel show. Please renew this!!

Really enjoy the knowledge and action of this show. i put this series on repeat. Desi is a great addition. Please renew this.

I like the show. It made me mad when Riley and Mac didnt get together. Im not ap tv nut but have become very interested in these characters.

I love macgyver and the characters very much. this show brings me so much joy and gives me something to hold onto in my life. they bring happines to me and i would love to have another great season like every other. please renew for season 6 🙂