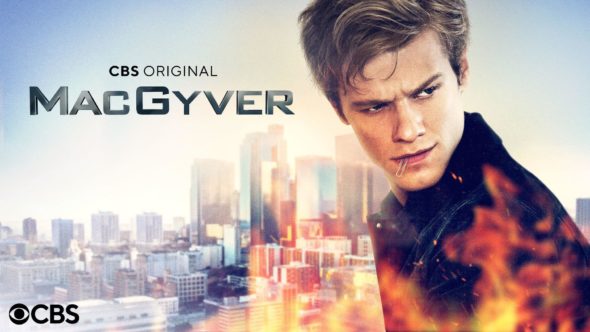 Though MacGyver has never been a big hit for CBS, this action-adventure series has been a consistent performer in the ratings. Will the show continue to do well enough to stay on the air for another year? Will MacGyver be cancelled or renewed for season six? Stay tuned. *Status Update Below.

MacGyver stars Lucas Till, Tristin Mays, Justin Hires, Meredith Eaton, Levy Tran, and Henry Ian Cusick. A reimagining of the 1985 TV series, this show centers on Angus “Mac” MacGyver (Till), a 20-something adventurer. Mac is an operative in a secret organization within the US government called the Phoenix Foundation. There, he uses his vast scientific knowledge and an extraordinary talent for unconventional problem-solving to save lives. In his high-risk missions, Mac is aided by hacker Riley Davis (Mays); Mac’s best friend, prosthetics expert Wilt Bozer (Hires); Director of Operations Matty Weber (Eaton); the team’s protector, Desi Nguyen (Tran); and Russ Taylor (Cusick), a quick-witted former military operative and manipulator. Under the aegis of the Phoenix Foundation, MacGyver takes on the responsibility of saving the world, armed to the teeth with resourcefulness and little more than bubble gum and a paper clip.

For comparisons: Season four of MacGyver on CBS averaged a 0.67 rating in the 18-49 demographic and 6.08 million viewers.

What do you think? Do you like the MacGyver TV series on CBS? Should it be cancelled or renewed for a sixth season?

my thought is, given that they had added henry ian cusick in the later seasons, i think they should redo the show entirely, but keep most of the cast, with the exception of eaton
the show could use improvement

Goodbye Macgver such a great show but original is was classic icon from 1980’s more better my opinion same style enjoy it and love it never missed it.

This show started going down hill when Jack left. It was one of my favorites but writing got to woke!

Many people feel the same way about Jack. The show really went down the toilet character tram didn’t fit the role it worse fell in love MacGyver spell doom for any TV show. Rest In Peace

It’s too bad got canceled!!! Out of all the reboots this and Hawaii five-o were the best!!! Mangnum PU!!(stinks). Bringing back CSI it was done and buried leave it B!!!
Their were other shows that could’ve been cancelled!!!

This show is OK. But not even close to good as the original one.
RDA is the real and only macgyver.

We didn’t even had the original sound track. Dozens of year later.. I can still hear it in my head. Pretty sure other fans of the original one can.. And they don’t put it in the reboot? It was a really bad start for me from the beginning. They could also have linked the new one to the old one.. Like the new Angus being the son of the old one, and having RDA doing a cameo or two here and there.. The final nail in the coffin for me was when they turned totally woke with BLM stuff and… Read more »

I love this show for the first couple seasons but when train up here and then had a love affair with MacGyver is when I just completely stopped. There is no reason to do this and it’s just totally pathetic in ruins the concept of this series. Otherwise I would’ve been really sad the show was canceled but because of what they did to the show within the last two years I couldn’t tolerate it and Minnie like me agrees. I hate to see it go but maybe someday they’ll read make this series and learn from the mistakes they… Read more »