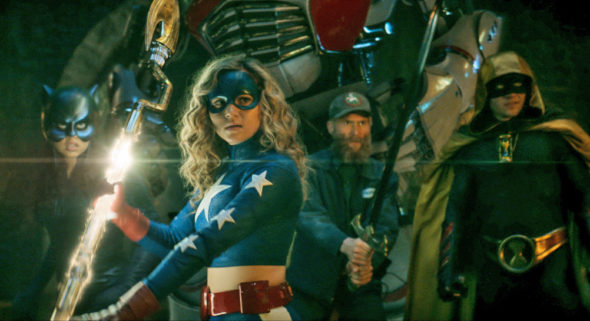 Courtney and her friends will have a lot more time to learn how to be superheroes. The CW has already renewed DC’s Stargirl for a third year which will air as part of the 2021-22 network season. Season two will debut on Tuesday, August 10th.

Debuting on the DC Universe streaming service in May 2020, DC’s Stargirl stars Brec Bassinger, Luke Wilson, Amy Smart, Trae Romano, Cameron Gellman, Yvette Monreal, Anjelika Washington, Meg DeLacy, Neil Jackson, Jake Austin Walker, Christopher James Baker, and Hunter Sansone. The series follows high school sophomore Courtney Whitmore (Bassinger). Her teen life is turned upside down when her mother (Smart) remarries and then moves the household from Los Angeles to the small community of Blue Valley in Nebraska. While trying to fit in, Courtney discovers that her new stepfather, Pat Dugan (Wilson), was once the sidekick to a long lost hero named Starman (Joel McHale). She also finds Starman’s powerful cosmic staff. Soon, Courtney inspires an unlikely group of young heroes to help stop a group of villains from the past, the Injustice Society, who once destroyed the legendary Justice Society of America.

On The CW, the first season of DC’s Stargirl averaged a 0.21 rating in the 18-49 demographic and 946,000 viewers in live+same day viewing. The series was renewed for a second season in July when it became a CW exclusive and left DC Universe.

Today, The CW renewed Stargirl for another year. The network also issued a second season renewal for the reboot of Kung Fu.

“We are beyond proud to continue to share the stories of Nicky Shen and Courtney Whitmore, two strong, powerful young women at the center of this new generation of hit shows for The CW in Kung Fu and DC’s Stargirl,” said Mark Pedowitz, Chairman and Chief Executive Officer, The CW Network. “While each boasts remarkable talent on both sides of the camera, Kung Fu and DC’s Stargirl have not only treated fans to some visually stunning action and high-flying heroics, but they also both strike very powerful emotional chords as they delve into the family dynamics and personal relationships at their core, and we are so excited to see what happens next.”

What do you think? Do you like the DC’s Stargirl TV series? Will you be watching season two later this year? Are you glad that it’s already been renewed for season three?

I’m so happy it’s coming back. I thought it would be a teenage snipe hunt when I first encountered it but it turned out to be fabulous. Thank you CW you introduced me to the Justice Society Of America. Which i didn’t know about.. Good Show !

Glad it was renewed. Stargirl really grew on me. Had no idea I would end up enjoying it as much as I did. At first , I thought I would just give it a try but it quickly became one of my favorite shows on the CW. Hope Courtney and the other heroes in training continue on the CW for years and years to come!!!!