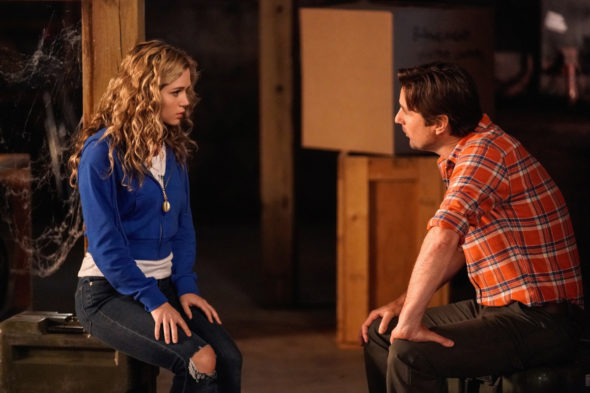 Courtney and her friends are going to get more time to learn how to be heroes. The CW has renewed DC’s Stargirl TV show for a second season. The series won’t be returning to DC Universe.

The first season of DC’s Stargirl averages a 0.23 rating in the 18-49 demographic and 1.05 million viewers. It’s one of the network’s highest-rated summer series.

First season episodes of the series currently premiere on Mondays on the DC Universe streaming platform and are then broadcast on The CW on Tuesday nights. In year two, Stargirl will air on The CW and will then be available via the network’s app for streaming the next day.

July 6, 2020 (Burbank, CA) – The CW Network today announced it has renewed the hit new series DC’S STARGIRL for a second season. The CW will become the exclusive in-season home to the breakout superhero hit next season, airing on The CW Television Network and streaming the next day on The CW’s free, ad-supported streaming platforms. The first season of DC’S STARGIRL is currently airing Tuesdays (8:00-9:00pm ET/PT).

DC’S STARGIRL follows high school sophomore Courtney Whitmore (series star Brec Bassinger, “Bella and the Bulldogs,” “School of Rock,” “The Goldbergs”) as she inspires an unlikely group of young heroes to stop the villains of the past. This new drama reimagines Stargirl and the very first superhero team, the Justice Society of America, in an unpredictable series. The series focuses on the character that started creator Geoff Johns’ career as a comic book writer when he created her in 1999, lovingly inspired by his late sister who was killed in a 1996 plane crash.

What do you think? Do you like the DC’s Stargirl TV series? Are you glad that it’s been renewed for a second season? Do you currently watch on The CW or on DC Universe?

I think Stargirl is great. My favourite episode is number 2. The dialogue is excellent and the scenes flow into each other. I like Luke Wilson and Amy Smart, seeing them as husband and wife seems like a good match, they have chemistry together. I like seeing the Afro-Americans as a family together. So many TV shows and movies portray Afro-Americans with no father figure, it makes me very angry.

I think the show is awful. The main character stargirl is nothing but a whiny brat. There’s so many evil characters in this show it’s hard to keep up with them. I just expected more from DC comics. Not only that the special effects are pretty bad.

My wife really enjoy the show so much that I would give it a 10.

It’s refreshing and fun. So much better than the profane bloodily trash you see so often. Thank you DC Universe.

Lots of fun show! Great to see something that isn’t about crime-stoppers.

DC Universe viewer numbers must be pretty awful for them to switch the series to CW and renew it with those numbers. I wonder if HBO Max will swallow up that service as well.

I tried, got bored, took a nap.

Saw this was a thing and now I’m like wow…renewed already? That was fast. The “Flarrowverse” has become wayyyy to SJW so I’m just not interested. The last time I really watched was during one of their crossover events and I actually watched a Supergirl episode. My goodness the “PC” of the show. I soured on Supergirl when they were like “oh it’s not fair you can’t be a female president despite you being an alien from another planet, you are doing a great job and just need to keep being president.” Nope. Not for me.

why am I not surprised at another SJW PC dumpster fire of a (DC) (comic book) show.

Show is awful I stopped watching a few episodes in.
Giving up on The Flash also for the S.J.W. firing of Hartley Sawyer.

I love this show! It reminds me of BTVS.

I don’t like this. Under CW wings this show will be bad, like most CW hero shows. Instead of actual plot we will have another boring teen drama extended to 22 episodes.

This has always been under The CWs wing. DC Universe having it was just an added bonus.

Will this become part of Arrowverse?

CW is going to renew DC’s Stargirl but couldn’ renew Katy Keene which is a way better show.

Sure agree with you. Katy Keene much better and enjoyable

Thank you . Love this not even teenager who care love this show so good dc comics.

The girls real ages are 21-28 not teenagers cw is dc,disney plus is marvel and starwars.