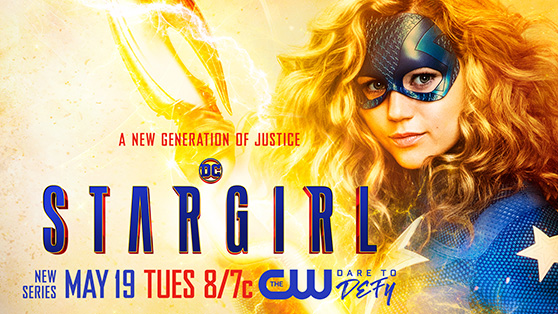 The CW has had some great success with TV shows based on DC Comics characters. The DC’s Stargirl series was created for DC Universe and episodes are released on that streaming service first. Could this strategy negatively affect the traditional ratings? Will DC’s Stargirl be cancelled or renewed for season two? Stay tuned. *Status update below.

What do you think? Do you like the DC’s Stargirl TV series on The CW and DC Universe? Should it be cancelled or renewed for a second season?

*7/7/20 update: DC’s Stargirl has been renewed for a second season on The CW.

Considering all the political crap cw has been putting out for years now star girl was a welcomed break. I was hooked in episode one and it remained entertaining and felt like a real super hero show that didn’t try to preach to me. Finally something with super heroes where I can enjoy it and escape all the problems of real life like entertainment used to do. I hope it remains this way and I finally have a superhero tv show as good or better than smallville. Speaking of smallville the family moments in stargirl feel as real here as… Read more »

this show is well balance funny, heartwarming, inspiring and without a doubt will be much better than how the writer of Supergirl and The Flash are doing with their show. The Flash have so much drama in it and Barry Allen hardly smile or laugh when he use to be the joker in Justice League. and it Supergirl, they focus most of their attentions on some other character and the lgbtq when it was supposedly a kids friendly show. one or two episode should be enough for any character but they took almost half a season just run around with… Read more »

Wasn’t nearly as bad as I expected when I read it was going to be on the CW. But it wasn’t produced/written by them, so it wasn’t awful. They are saving turning into more of their agenda pushing garbage for season 2.

The cw gonna murder the 2nd season of this show fam

This show is facing ZERO competition right now and the ratings are very weak.

They are great for a CW summer show. Consider Bulletproof is 0.09

So happy renewed new show so good love this show it a lot better supergirl. Don’t like awful but stargirl, The flash, use love arrow got weird story line. Need stop making more dc comic tired of it even though love it.

FAM, anything is better SJWgirl plus stargirl got picked up for a 2nd season yes, but it was by the fecking cw, so that means it’s probably gonna be super woke

I still hope and pray that Stargirl will come back for the second season.

I totally agree, stopped watching a couple episodes in. She looks like she is one of the “American Gladiators” in the costume. Her character is annoying, and the little brother is also.
Hire back Hartley Sawyer on “The Flash” C.W.

I love this show! It’s like a new Buffy the VS.

We liked it at first but now the violence is getting to be too much.

Let’s just hope they don’t add in any SJW & political nonsense like those 3 other muck shows. I beg fam

Berlanti Productions; NO thank you. This guy sucks, and has ruined every show he has been involved with. Nothing but watered down dribble, plots that are full of giant holes, and it all reeks with SJW crap.

season one of stargirl just now started and i hope stargirl doesn’t end after it’s first season because i would like to see more of stargirl and am looking forward to seeing the stargirl team to team up..

Edited down version of DC Universe show, so will not be watching on CW.

Dia
Reply to  SM in SF

How edited down is it? Has anyone compared them to see?

It is edited for time for commercials, the pilot lost about 10 minutes. I imagine its different for each episode as streaming shows have no need to edit for commercials typically and vary in length. The show needs to be about 42-45 minutes for CW and the eps on DC universe are typically 50+ minutes.

Dia
Reply to  SM in SF

How much do they edit?