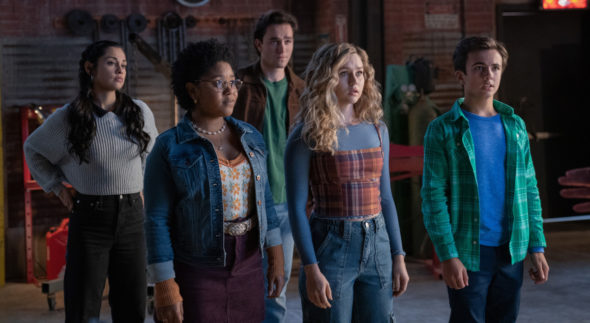 Can these young heroes triumph over this old evil? Has the DC’s Stargirl TV show been cancelled or renewed for a third season on The CW? The television vulture is watching all the latest cancellation and renewal news, so this page is the place to track the status of DC’s Stargirl, season three. Bookmark it, or subscribe for the latest updates. Remember, the television vulture is watching your shows. Are you?

Airing on The CW television network, DC’s Stargirl stars Brec Bassinger, Luke Wilson, Amy Smart, Yvette Monreal, Anjelika Washington, Cameron Gellman, Trae Romano, Hunter Sansone, Meg DeLacy, and Nick Tarabay. The series follows high schooler Courtney Whitmore (Bassinger) whose life is turned upside down when her mother (Smart) remarries and moves the household from Los Angeles to the small community of Blue Valley in Nebraska. While trying to fit in, Courtney discovers that her new stepfather, Pat Dugan (Wilson), was once the sidekick to a long-lost hero named Starman (Joel McHale). She also finds Starman’s powerful cosmic staff and is able to wield it. Soon, Courtney inspires an unlikely group of young heroes to help stop a group of villains from the past and to uphold the legacy of the first superhero team, the Justice Society of America. In the second season, Courtney and her friends take on one of the most frightening adversaries, the dark entity of corruption known as Eclipso.

The second season of DC’s Stargirl averages a 0.12 rating in the 18-49 demographic and 639,000 viewers in the live+same day ratings (includes all DVR playback through 3:00 AM). Compared to season one, that’s down by 45% in the demo and down by 32% in viewership in the live+same day ratings (including DVR playback through 3:00 AM). While these numbers don’t include further delayed or streaming viewing, they are a very good indicator of how a show is performing, especially when compared to others on the same channel. Though other economic factors are involved, the higher-rated shows usually get renewed and the lower-rated ones get cancelled. Find out how DC’s Stargirl stacks up against other CW TV shows.

We don’t have to wonder if The CW will cancel DC’s Stargirl since it’s already been renewed for season three. I’ll update this page with breaking developments. Subscribe for free alerts on DC’s Stargirl cancellation or renewal news.

What do you think? Are you glad that the DC’s Stargirl TV show has been renewed for a third season? How would you feel if The CW had cancelled this TV series, instead?

Please boost your ratings look forward every Tuesday night superhero drama enjoy it and love it. Never missed any episode of it. Who cares teenager I am older still love watching it.

Good news Stargirl got renewed another season before season even started look forward every Tuesday night drama so good love it and enjoy it never missed any episodes of it past summertime.

I am really pleased. The show may be aimed at a young demographic, but to anyone who loves superhero vehicles, it is a refreshing perspective and thus far, I find the crafting of the story to be well done.