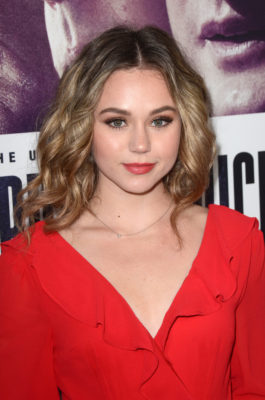 DC Universe has found their Stargirl. Today, the streaming service announced Brec Bassinger will star in the upcoming TV show.

DC Universe has not yet announced a premiere date for Stargirl, but the streaming service just launched on September 15th.

DC Universe’s newest hero is bound to be a star.

In what will give the just-launched DC Universe its first live action female-fronted superhero show, actress Brec Bassinger has been cast in the title role of Stargirl in the upcoming series based on the staff-wielding character. Announced at San Diego Comic-Con this summer, Stargirl will be the DC Universe’s sixth original series.

Outside of costume, Stargirl is known as Courtney Whitmore, a young woman’s who’s described as smart, athletic and above all else kind. The high school sophomore’s seemingly perfect life hits a major speedbump when her mother gets married and her new family moves from Los Angeles, California to Blue Valley, Nebraska. Struggling to adapt to a new school, make new friends and deal with a new step-family, Courtney discovers her step-father has a secret; he used to be the sidekick to a superhero. “Borrowing” the long-lost hero’s cosmic staff, Courtney becomes the inspiration for an entirely new generation of superheroes.

The series itself follows Courtney as she inspires that unlikely group of young heroes to stop the villains of the past, and aims to reimagine Stargirl and the very first superhero team, the Justice Society of America, in what promises to be an unpredictable series. Stargirl focuses on the character that started executive producer Geoff Johns’ career as a comic book writer when he created her in 1999, and was lovingly inspired by his late sister, who was killed in a 1996 plane explosion.

Courtney Whitmore made her first appearance in 1999’s STARS AND S.T.R.I.P.E. #0 in an origin story that sounds pretty similar to the one described on the show. In the comics, Courtney is the stepdaughter of Pat Dugan, who was the former sidekick of youthful hero the Star-Spangled Kid. After Courtney finds the Kid’s costume among her stepfather’s things, she decides to start wearing it, becoming the second Star-Spangled Kid. However, she soon evolves into Stargirl after being given Starman’s cosmic staff.

As alluded to in the DC Universe series description, Stargirl is probably best known as a member of the Justice Society of America, and most of her comic book adventures have taken place in the pages of JSA. While Courtney’s more than capable on her own, most of her powers come from the cosmic staff, which was given to her by Jack Knight when he retired as Starman, as well as the Star-Spangled Kid’s cosmic converter belt. Together, they give her enhanced strength, speed and agility, as well as the ability to fly and manipulate energy into force fields and energy blasts.

“There is no other character in comic books more special to me than Stargirl, and after searching far and wide I can say there is no other actor on the planet that embodies her more than Brec Bassinger,” shared Johns, who’s also an executive producer and writing the first episode of the show. “Brec’s warmth, strength, humor and positive energy are core to who Courtney Whitmore is. I’m so grateful she’s signed on for the role.”

Bassinger is probably best known for her role in the television series based on the movie School of Rock, though she’s also recently appeared in the Hulu original series, All Night, and had a regular role earlier in her career on the Nickelodeon series, Bella and the Bulldogs. She also appeared as Zoe McIntosh in two episodes of The Goldbergs.

Interestingly, for a hero who isn’t as widely known as Wonder Woman, Supergirl, Catwoman, Harley Quinn or many of DC ‘s other female characters, Stargirl has had quite a life outside comics. She’s appeared twice before in live action TV, first embodied by Britt Irvin in Smallville and most recently in DC’s Legends of Tomorrow, where she was played by Sarah Grey. In addition, she’s been seen on Justice League Unlimited and Justice League Action, voiced by Giselle Loren and Natalie Lander.

Still, with a new self-titled series on its way and brought to life by a talented young actress like Bassinger, it’s clear that Courtney’s star is very much on the rise. What do you think about the Stargirl casting? Who would you like to see Courtney battle in the first season? Share all your thoughts down below in the comments!”

What do you think? Are you a DC Comics fan? Will you watch Stargirl?

Yes I love this type of programs