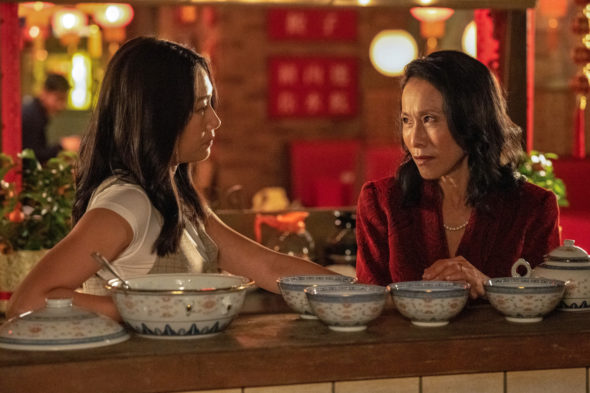 Will Nicky become a shifu? Has the Kung Fu TV show been cancelled or renewed for a third season on The CW? The television vulture is watching all the latest cancellation and renewal news, so this page is the place to track the status of Kung Fu, season three. Bookmark it, or subscribe for the latest updates. Remember, the television vulture is watching your shows. Are you?

Airing on The CW television network, the new version of Kung Fu stars Olivia Liang, Kheng Hua Tan, Shannon Dang, Jon Prasida, Eddie Liu, Gavin Stenhouse, Vanessa Kai, Yvonne Chapman, Tony Chung, and Tzi Ma. Set in the present day, the series revolves around Nicky Shen (Liang), a young Chinese American woman who questions her life’s trajectory and drops out of college to go on a life-changing journey to an isolated monastery in China. When Nicky returns to San Francisco, she finds that her hometown is overrun with crime and corruption. The second season picks up six months later. All is going well for Nicky and her family until the reemergence of sinister billionaire Russell Tan (guest star Kee Chan), and the surprise appearance of Nicky’s long-lost cousin, Mia (guest star Vanessa Yao). With the help of Henry (Liu), Althea (Dang), Ryan (Prasida), Evan (Stenhouse) and Dennis (Chung), Nicky must face off against the Tan family and become a shifu in her own right.

The second season of Kung Fu averages a 0.08 rating in the 18-49 demographic and 518,000 viewers in the live+same day ratings (includes all DVR playback through 3:00 AM). Compared to season one, that’s down by 39% in the demo and down by 46% in viewership. While these numbers don’t include further delayed or streaming viewing, they are a very good indicator of how a show is performing, especially when compared to others on the same channel. Though other economic factors are involved, the higher-rated shows usually get renewed and the lower-rated ones get cancelled. Find out how Kung Fu stacks up against other CW TV shows.

Will The CW cancel or renew Kung Fu for season three? This show is based on an existing property and has done pretty well in the ratings in the past. The network’s been renewing nearly every show for the past couple of seasons but now, The CW is up for sale and a new owner may not want the same kind of programming. I suspect that Kung Fu will be renewed but, if a sale goes through, the series could move to HBO Max. The streaming service is owned by Warner Bros. and Warner Bros. Television produces the show. I’ll update this page with breaking developments. Subscribe for free alerts on Kung Fu cancellation or renewal news.

What do you think? Are you glad that the Kung Fu TV show has been renewed for a third season? How would you feel if The CW had cancelled this TV series, instead?