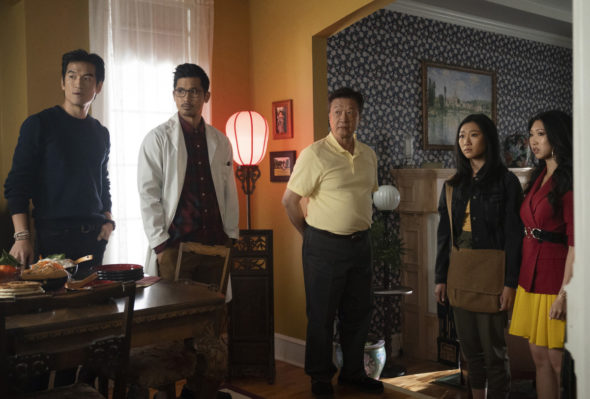 Can Nicky bring justice to her hometown? Has the Kung Fu TV show been cancelled or renewed for a second season on The CW? The television vulture is watching all the latest cancellation and renewal news, so this page is the place to track the status of Kung Fu, season two. Bookmark it, or subscribe for the latest updates. Remember, the television vulture is watching your shows. Are you?

Airing on The CW television network, this new version of Kung Fu stars Olivia Liang, Tzi Ma, Kheng Hua Tan, Jon Prasida, Shannon Dang, Eddie Liu, Gavin Stenhouse, Yvonne Chapman, and Tony Chung. Set in the present day, the series revolves around Nicky Shen (Liang), a young Chinese American woman who questions her life’s trajectory and drops out of college to go on a life-changing journey to an isolated monastery in China. When Nicky returns to San Francisco, she finds that her hometown is overrun with crime and corruption and her own parents Jin (Ma) and Mei-Li (Tan) are at the mercy of a powerful Triad. Nicky depends on her martial arts skills and Shaolin values to protect her community and bring criminals to justice. She also searches for Zhilan (Chapman), the ruthless assassin who killed Nicky’s Shaolin mentor Pei-Ling (Kai) and is now targeting Nicky herself.

Will The CW cancel or renew Kung Fu for season two? The network has been renewing the vast majority of its series and this one seems to fit well with the rest of The CW scripted shows. The initial ratings are also very good. I believe it will be renewed. I’ll update this page with breaking developments. Subscribe for free alerts on Kung Fu cancellation or renewal news.

5/3/21 update: Kung Fu has been renewed for a second season on The CW.

What do you think? Are you glad that this Kung Fu TV show has been renewed for a second season? How would you feel if The CW had cancelled this TV series, instead?

My family and I love this show!! We are very happy to see that it has been renewed!!