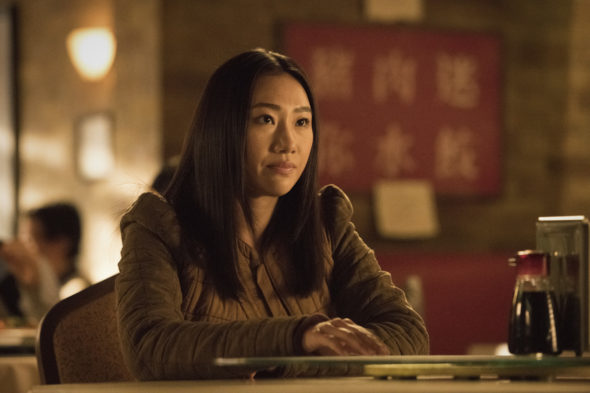 Nicky Shen’s work is not done. The CW has renewed the Kung Fu TV series for a second year, which will air as part of the 2021-22 television season.

This new version of Kung Fu stars Olivia Liang, Tzi Ma, Kheng Hua Tan, Jon Prasida, Shannon Dang, Eddie Liu, Gavin Stenhouse, Yvonne Chapman, and Tony Chung. Set in the present day, the series revolves around Nicky Shen (Liang), a young Chinese American woman who questions her life’s trajectory and drops out of college to go on a life-changing journey to an isolated monastery in China. When Nicky returns to San Francisco, she finds that her hometown is overrun with crime and corruption and her own parents Jin (Ma) and Mei-Li (Tan) are at the mercy of a powerful Triad. Nicky depends on her martial arts skills and Shaolin values to protect her community and bring criminals to justice. She also searches for Zhilan (Chapman), the ruthless assassin who killed Nicky’s Shaolin mentor Pei-Ling (Kai) and is now targeting Nicky herself.

Airing on Wednesday nights, the first season of Kung Fu averages a 0.19 rating in the 18-49 demographic and 1.22 million viewers in the live+same day ratings. The series premiere has been seen by more than 3.5 million viewers when factoring in delayed viewing.

“We are beyond proud to continue to share the stories of Nicky Shen and Courtney Whitmore, two strong, powerful young women at the center of this new generation of hit shows for The CW in Kung Fu and DC’s Stargirl,” said Mark Pedowitz, Chairman and Chief Executive Officer, The CW Network. “While each boasts remarkable talent on both sides of the camera, Kung Fu and DC’s Stargirl have not only treated fans to some visually stunning action and high-flying heroics, but they also both strike very powerful emotional chords as they delve into the family dynamics and personal relationships at their core, and we are so excited to see what happens next.”

What do you think? Do you like this newest incarnation of the Kung Fu franchise? Are you glad that it’s been renewed for season two?

I love the show. Appreciate the diversity with great blend of action, drama, and comedy.

Very good show and so glad it will be renewed

King Fu definitely needs to be renewed. The strong female leads and family values are what we need more of now and in the future.

I really like it, though I was skeptical at first. Now it’s a favorite.

I’m totally addicted to this show. One of a few shows that I watch on TV.

Whoohoo! The show gets a second season!! This is wonderful news

Well The Season Finale of Kung Fu was supposed to be June 30. But now it’s July 21. And thanks for torturing Riverdale fans the CW just pushed back Riverdale Return from July 7 to August 11. THANKY YOU. So NOT HAPPY.

Love it!
The least realistic costume note: women’s fancy dress clothing with large enough pockets to put a dagger in, and reinforced enough so it dose not cut you?

Have done a great job..searching for weapons to bring down evil.

CW is more pitiful by the years…

I love the new & improved Kung Fu! It is not only entertaining, but also keeps one riveted due to the excellent story line.

Not watching this show ever