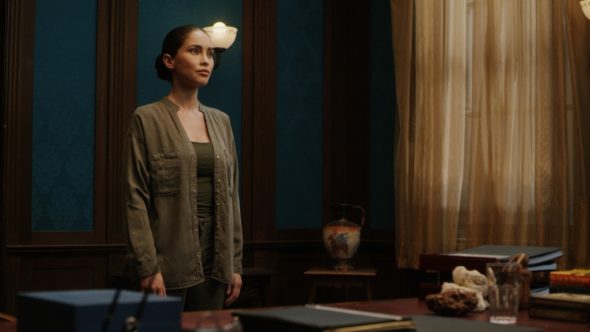 Pandora is taking us back to the future next summer. The CW has renewed the sci-fi drama for a second season, per Deadline. Season two will air in 2020. This renewal comes just a few days after the network renewed The Outpost, which is another summer series on The CW.

Quintana plays the title character, a young woman trying to overcome the death of her parents while finding new meaning in her life by joining EarthCom Fleet Training Academy. She soon learns there are secrets about her own identity, and she must uncover the truth.

What do you think? Did you watch Pandora over the summer? Will you watch season two next summer on The CW?

Can’t wait for it to return , fantastic series.

Awesome series. Great characters who are strong, unique, well-defined. Plots are intricate but yet loosely and logically tied together. Themes are clear-cut while at the same time cleverly obscured by the various plot lines. Episodes are logically written and build successfully upon one another. Very intriguing and absorbing programs.

Pandora was awsome…yes ill watch it and The Outpost.

I am excited that Pandora is on for another season! I find the plot intriguing and the characters well played. Thank you.

I saw the season one of pandora and will definitely love to see the second season… so exited!

My wife and I didn’t see it during the summer, however we did binge watch over the last couple of days on CW streaming and although the first couple of episodes did not impress us, it developed really well. We are glad to see it has been renewed for another season and will be watching next summer.

Definitely want a season two!!! This show has a little Terminator, a little Spartacus, Star Wars, Star Trek and a little Alien wrapped up into a weekly college sci-fi flick

Totally excited for another season!

Glad this will get another season. Show finished strong. Great job CW

YES! YES! YES! I’m so happy Pandora gets another season! The storylines are quite ambitious and the paths of the characters have already taken great leaps from the school kids of episode 1. I love these flawed but brave characters. And the scifi elements mixed with the social issues makes a refreshing and compelling series.

I enjoyed the show
Will watch next season

I love the show! it’s a great sci-fi show! and entertaining! was very glad to see it got renewed!