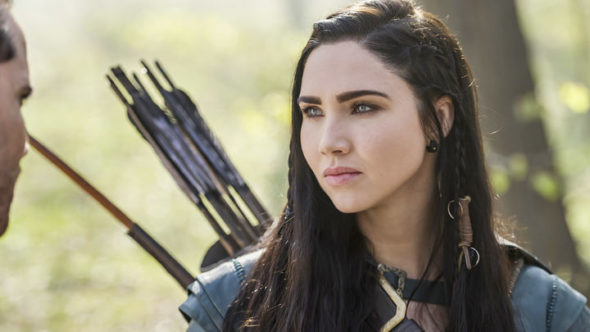 Talon’s journey will continue. The Outpost TV show has been renewed for a third season on The CW network.

A fantasy drama from creators Jason Faller and Kynan Griffin, The Outpost stars Jessica Green, Jake Stormoen, Anand Desai-Barochia, Imogen Waterhouse, Robyn Malcolm, and Andrew Howard. The story centers on Talon (Green), the lone survivor of the “Blackbloods” race. When she was still a child, a ruthless mercenary gang slaughtered her entire village. Now that she has come of age, Talon has come into a mysterious power. Having defeated Dred’s army and retaken the Outpost, in the second season, Talon and Gwynn (Waterhouse) ready themselves to battle the Prime Order.

The second season of The Outpost averaged a 0.12 rating in the 18-49 demographic and 590,000 viewers. Compared to season one, that’s down by 16% and 6%, respectively. The second season finished airing last month, on September 26th.

Executive producer Dean Devlin broke the news via Twitter and also said, “We are extremely excited about getting the opportunity to make another season of The Outpost. We’re grateful for the support The CW has given us and we’re thrilled to be able to bring another season to our amazing partners around the world. The show has proven to be a tremendous success and continues to build on an incredible fan base.”

Members of the cast and executive producer Douglas Pasko chimed in.

Finally we can share the news! It was honestly almost too much for me to keep to myself ❤️❤️❤️ There are some fearsome #blackbloods that need dealing with!!!

Thank @tv_levy @MileageRunner and the rest of the @TheCW Executive team who saw the possibilities and had faith in @outpostseries being successful. You guys are the best!

What do you think? Do you like The Outpost TV show? Are you glad that it’s been renewed for a third season?

What great news!! Thanks for renewing this show. It’s fantastic!

Absolutely delighted, I wish there were more shows like this, or that they were more popular. This was a surprising find for a show that I hadn’t heard about, one that really adds innovative and novel content to the fantasy genre. Well-cast and well-acted 3-dimensional characters, and delightful sets with obvious effort put into the depth of flavour.

Delighted that this engrossing, well-cast, well-acted, and refreshingly off-beat show is returning. It’s one of the reasons I keep watching tv

Yes I love the series. .,cannot wait for series 3

yes, very eager for the return of one of the few series worth watching

Yay! A very good show with good story lines. Hope it catches on with a larger audience so it can be around for awhile

I have become quite a fan of Dean Devlins directing over the past two decades. The Outpost is just another example of giving the people what they want to watch.

Extremely happy that Outpost is returning long over due. Torture to the fans who follow. Please bring back soon.