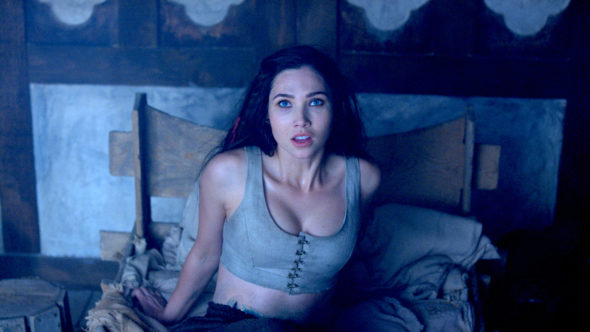 Does Talon’s quest continue? Is The Outpost TV show cancelled or renewed for a second season on The CW? The television vulture is watching all the latest cancellation and renewal news, so this page is the place to track the status of The Outpost, season two. Bookmark it, or subscribe for the latest updates. Remember, the television vulture is watching your shows. Are you?

A CW fantasy drama from creators Jason Faller and Kynan Griffin, The Outpost stars Jessica Green, Jake Stormoen, Anand Desai-Barochia, Imogen Waterhouse, Michael Flynn, Robyn Malcolm, Andrew Howard, and Philip Brodie. The supernatural TV series centers on Talon (Green), the lone survivor of the “Blackbloods” race. When she was still a child, a ruthless mercenary gang slaughtered her entire village. Now that she has come of age, Talon decides to track her family’s murderers, all the way to a harsh and unruly fortress, at the edge of civilization. Along the way, she discovers she has a mysterious power, but she has to learn to keep it in check, if she’s going to save herself and the world.

The first season of The Outpost averaged a 0.14 rating in the 18-49 demographic and 628,000 viewers. Learn how The Outpost stacks up against the other CW TV shows.

Will The CW cancel or renew The Outpost for season two? The ratings are terribly low so, unless this series is really cheap for the network, I can’t see it being brought back for another season on The CW. I’ll update this page with breaking developments. Subscribe for free The Outpost cancellation or renewal alerts.

10/9/18 update: The CW has picked up a second season of The Output TV series. Details here.

What do you think? Are you glad that The Outpost TV show has been renewed for season two? How would you feel if The CW had cancelled this TV series, instead?

Just Love “The Outpost”! Glad to see it’s up to 13 episodes (so far) for Season 2 and hope for more. This Series is too good to let go; the many characters offer the opportunity for great storylines in Seasons to come. Don’t cancel this great new show!

Great show glad there will a sea on 2

I like watching this Outpost tv series please renew this for a second season. I watch all programming shows on my television so it can help to get tv ratings high

I also want to see more of the Outpost.