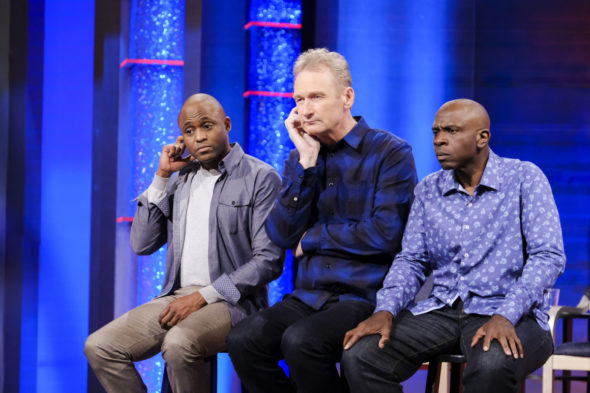 Does the littlest network still have a place for fun and games? Has the Whose Line Is It Anyway? TV show been cancelled or renewed for a 15th season on The CW? The television vulture is watching all the latest cancellation and renewal news, so this page is the place to track the status of Whose Line Is It Anyway? season 15. Bookmark it, or subscribe for the latest updates. Remember, the television vulture is watching your shows. Are you?

A CW comedy improv series, Whose Line Is It Anyway? is hosted by Aisha Tyler. In each episode Ryan Stiles, Wayne Brady, and Colin Mochrie improvise, along with a guest comedian. The cast tests their comedic reflexes by participating in improvisational games. At the end of each round, Tyler awards points for their work, and the points don’t count. Guests in season 14 include Grace Byers, Jeff Davis, Ross Matthews, and Andrea Navedo

What do you think? Are you glad that the Whose Line Is It Anyway? TV show was renewed for a 15th season? How would you feel if The CW had cancelled this TV series, instead?

it’s cheap to produce, and it gets decent ratings (better than a rerun, I’d guess), my guess, is that it continues as long as its mainstays (Wayne, Ryan & Colin) want to continue, and, perhaps beyond, if they bring in semi-regulars to be regulars; I wish they’d bring back Drew, though, he was funnier, and had better interactions with the rest of the cast

It just recently passed its 100th aired episode as well. And reruns of this version currently air on UP and Bravo.