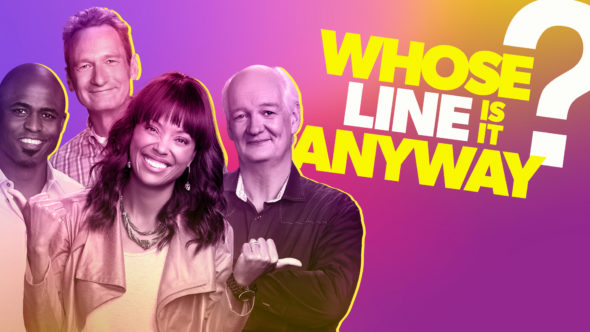 Last year, Nielsen ratings for the Whose Line Is It Anyway? TV show remained relatively steady, with just the tiniest drop off in total audience size. Can they make gains in the 15th season, or is it too late in the show’s life? Will Whose Line Is it Anyway? be cancelled or renewed for season 16? Stay tuned. *Status update below.

A CW comedy improv series, Whose Line Is it Anyway? is hosted by Aisha Tyler. In each episode Ryan Stiles, Wayne Brady, and Colin Mochrie improvise, along with a guest comedian. The cast tests their comedic reflexes by participating in improvisational games. At the end of each round, Tyler awards points for their work, and the points don’t count. Guests in season 15 include Charles Esten, Tinashe, and Jonathan Magnum.

For comparisons: The 14th season of Whose Line Is It Anyway? on The CW averaged a 0.29 rating in the 18-49 demographic with 1.046 million total viewers.

What do you think? Do you still enjoy the Whose Line Is It Anyway? TV series? Should The CW cancel or renew this TV show for a 16th season?

*Update: Whose Line Is It Anyway? has been renewed for a 16th season.

There certainly something not going right on this show.