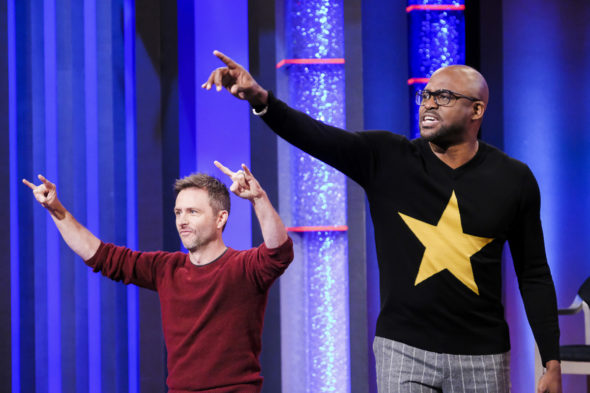 What’s the network’s line on this show? Has the Whose Line Is It Anyway? TV show been cancelled or renewed for a 16th season on The CW? The television vulture is watching all the latest cancellation and renewal news, so this page is the place to track the status of Whose Line Is It Anyway? season 16. Bookmark it, or subscribe for the latest updates. Remember, the television vulture is watching your shows. Are you?

A CW comedy improv series, Whose Line Is It Anyway? is hosted by Aisha Tyler. In each episode Ryan Stiles, Wayne Brady, and Colin Mochrie improvise, along with a guest performer. The cast tests their comedic reflexes by participating in improvisational games. At the end of each round, Tyler awards points for their work, and the points don’t count. Guests in season 15 include Charles Esten, Tinashe, and Jonathan Magnum.

Will The CW cancel or renew Whose Line Is It Anyway? for season 16? This unscripted series doesn’t draw great ratings but it seems inexpensive to produce. I expect it to be renewed as long as the performers want to keep doing it. I’ll update this page with breaking developments. Subscribe for free Whose Line Is It Anyway? cancellation or renewal alerts.

What do you think? Are you glad that the Whose Line Is It Anyway? TV show has been renewed for a 16th season? How would you feel if The CW had cancelled this TV series, instead?

I hope it never ends!

Such a brilliant show. So funny. They are all so talented. We can’t get enough of it.

Oh, I would be SOOOO happy to see this show again! I had no idea it was in recent production – hope I can find it somewhere. Probably saw my last shows 20 yrs ago, and I still talk about them. Best all around improv talent!

Such a great show! SO funny and a wonderful break from all the Covid and election stress even if an occasional barb is thrown! 😉 The cast is extremely talented. I hope they’ll renew it!

I recognized Wayne Brady’s voice on The Masked Singer from hearing him so often on this show. Oh the lyrics he comes up with! Amazingly talented man among a great team of characters.

Love watching this show. Looking forward to Season 16. Would love to know how to get tickets to see it live.