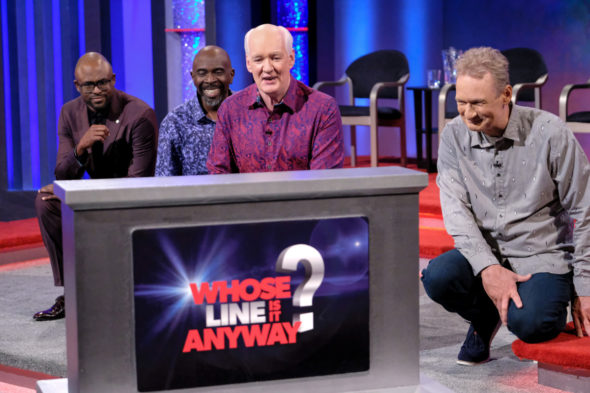 This venerable comedy series keeps chugging along. It’s in its 16th season overall and its eighth season on The CW. The show is relatively inexpensive to produce and even the reruns do pretty well in the ratings. Will Whose Line Is It Anyway? be cancelled or renewed for season 17? Stay tuned. Status Update Below.

A long-running comedy improv series, Whose Line Is It Anyway? is hosted by Aisha Tyler. In each episode Ryan Stiles, Wayne Brady, and Colin Mochrie improvise, along with a guest performer. The cast tests their comedic reflexes by participating in improvisational games. At the end of each round, Tyler awards points for their work, and the points don’t count. Guests in season 16 (the eighth on The CW) include Jeff Davis, Charles Eston, Chris De’Sean Lee, Cedric the Entertainer, Ricki Lake, Jonathan Mangum, Jeanine Mason, Candice Patton, Greg Props, Amber Riley, Adam Rippon, Brad Sherwood, and Gary Anthony Williams.

11/17 update: You can see the latest night’s ratings in context.

What do you think? Do you like the Whose Line Is It Anyway? TV series on The CW? Should it be cancelled or renewed for a 17th season?

I’ve watched every episode since the start and all reruns. The so fast and funny. There is nothing else like it on the air. Please renew.

I love the show Whose Line Is It Anyway. I’ve watched it through ALL 16 seasons! It’s one of my favorite shows!