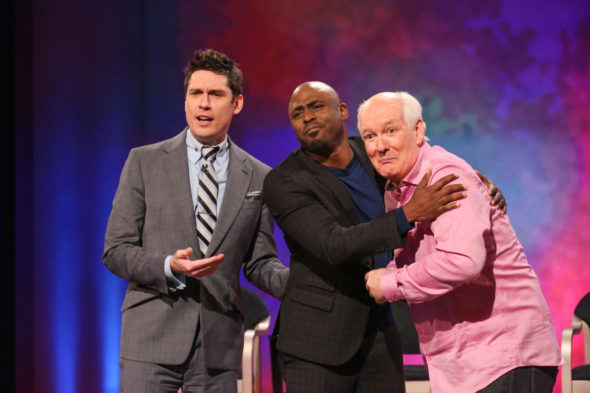 Will these performers’ imaginations ever run dry? Has the Whose Line Is It Anyway? TV show been cancelled or renewed for a 17th season on The CW? The television vulture is watching all the latest cancellation and renewal news, so this page is the place to track the status of Whose Line Is It Anyway?, season 17. Bookmark it, or subscribe for the latest updates. Remember, the television vulture is watching your shows. Are you?

Airing on the The CW television network, Whose Line Is It Anyway? is hosted by Aisha Tyler. In each episode Ryan Stiles, Wayne Brady, and Colin Mochrie improvise, along with a guest performer. The cast tests their comedic reflexes by participating in improvisational games. At the end of each round, Tyler awards points for their work, and the points don’t count. Guests in season 16 (the eighth on The CW) include Jeff Davis, Charles Eston, Chris De’Sean Lee, Cedric the Entertainer, Ricki Lake, Jonathan Mangum, Jeanine Mason, Candice Patton, Greg Proops, Amber Riley, Adam Rippon, Brad Sherwood, and Gary Anthony Williams.

Will The CW cancel or renew Whose Line Is It Anyway? for season 17? The series is relatively inexpensive to produce, gets good ratings even in reruns, and has become a staple of The CW schedule. I’m confident that it will be renewed as long as all involved want to continue making it. I’ll update this page with breaking developments. Subscribe for free alerts on Whose Line Is It Anyway? cancellation or renewal news.

What do you think? Are you glad the Whose Line Is It Anyway? TV show has been renewed for a 17th season? How would you feel if The CW cancelled this TV series, instead?

Sadly, the last two seasons of Whose Line have been ones that have been “in the can” as it were. That means they’ve been taped years ago, and the CW has been showing them for the past two years. I think this might be the last season for Whose Line. After all, how do you do this show in a raging pandemic? No audience, no laughs. No fun. Audience laughter (as well as participation) was always crucial to this show. Not giving up hope though. When this pandemic is finally over, the CW might pick the show up again. It… Read more »

Please don’t cancel Who’s Line . It is the only good laugh I get once a week. I even watch reruns. I’m these difficult times this is a bright spot

Love this show. They changed the format awhile ago to feature stars from the CW shows. I don’t think that added anything.

I believe that CW will renewal for the new season because it is a great series.

Please keep Who’s Line Is it Anyway. It has brought joy and laughter to my family thru the Pandemic.