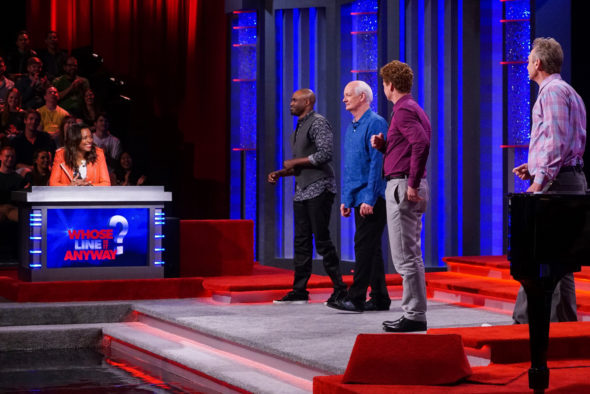 Do the points still not matter? Has the Whose Line Is It Anyway? TV show been cancelled or renewed for an 18th season on The CW? The television vulture is watching all the latest cancellation and renewal news, so this page is the place to track the status of Whose Line Is It Anyway?, season 18. Bookmark it, or subscribe for the latest updates. Remember, the television vulture is watching your shows. Are you?

Airing on The CW television network, Whose Line Is It Anyway? is hosted by Aisha Tyler and each episode typically features Ryan Stiles, Wayne Brady, Colin Mochrie, and a guest performer. The foursome tests their comedic reflexes by participating in a series of spontaneous improv games. After each round, Aisha will dole out points to the performers and declare a winner at the end of every episode (not that the points matter). Guests in season 17 (the ninth on The CW) include Jeff Davis, Jonathan Mangum, and Gary Anthony Williams.

Will The CW cancel or renew Whose Line Is It Anyway? for season 18? The show is relatively inexpensive to produce and is the network’s go-to series when they need something to fill a timeslot. The ratings aren’t great but reruns perform about as well as new episodes. I have no doubt that it will be renewed, even if some of the performers decide they’ve had enough. I’ll update this page with breaking developments. Subscribe for free alerts on Whose Line Is It Anyway? cancellation or renewal news.

What do you think? Are you glad that the Whose Line Is It Anyway? TV show has been renewed for an 18th season? How would you feel if The CW had cancelled this TV series, instead?

I’ve been a fan since the British original. I’d hate to see it canceled as it’s one of my all-time favorites.

My wife and I really love this show. We would be VERY disappointed if we had to live without it!

My wife and I will be very disappointed if Whose Line is canceled. We love it and have watched it since the first episodes with Drew as host

Actually. Drew Carey had the 2nd version. It was first filmed in England, hosted by Clive Stuart
Anderson. Some actors from the current show started appearing in the UK’s last season or two. There’s a definite difference, with British humor being more cerebral. Both are worth watching. Drew Carey is my least favorite host. He’s just not funny. I still enjoy the show no matter who hosts.