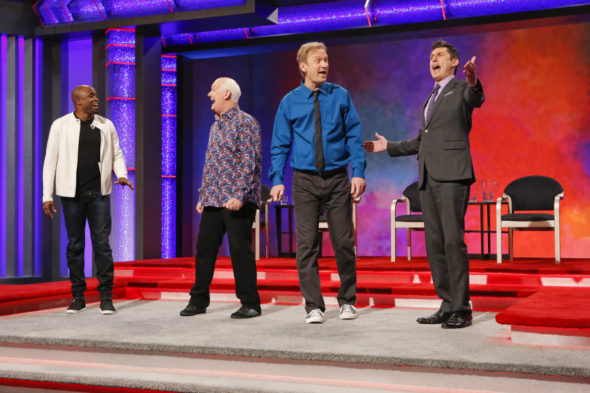 The points still don’t count but the episodes keep piling up. The CW has quietly renewed the venerable Whose Line Is It Anyway? TV series for an 18th season (the ninth season on CW).

Whose Line Is It Anyway? is hosted by Aisha Tyler and each episode typically features Ryan Stiles, Wayne Brady, Colin Mochrie, and a guest performer. The foursome tests their comedic reflexes by participating in a series of spontaneous improv games. After each round, Aisha will dole out points to the performers and declare a winner at the end of every episode (not that the points matter). Guests in season 17 (the ninth on The CW) include Jeff Davis, Jonathan Mangum, and Gary Anthony Williams.

The venerable sketch comedy show will return for its 18th season on Saturday, October 9th with two new episodes.  The series and World’s Funniest Animals will be the first CW shows to air on Saturday nights in the network’s 15-year history. In past years, the local affiliate stations programmed that night’s schedule.

What do you think? Are you a fan of the Whose Line Is It Anyway? TV show on The CW? Do you plan to watch season 18 of this comedy series on Saturday nights?

yeah love show so glad it has been renewed