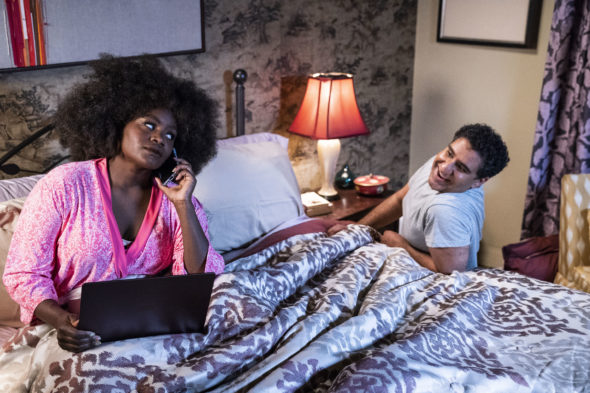 Would you return to the Bare Feet Retreat? Has The Guest Book TV show been cancelled or renewed for a third season on TBS? The television vulture is watching all the latest cancellation and renewal news, so this page is the place to track the status of The Guest Book season three. Bookmark it, or subscribe for the latest updates. Remember, the television vulture is watching your shows. Are you?

A TBS anthology comedy, season two of The Guest Book unfolds in a new town, at the Bare Feet Retreat in Mabel Beach, and features new series regulars Jimmy Tatro, Kimiko Glenn, and Dan Beirne, alongside returnees Carly Jibson and Eddie Steeples. The comedy centers on the guests who record their confessions, alibis, and farewells in the cottage’s guest book. This time around, they are hosted by town locals Bodhi (Tatro), Nikki (Glenn) and Tommy (Beirne).

The second season of The Guest Book averaged a 0.30 rating in the 18-49 demographic and 907,000 viewers. Compared to season one, that’s down by 24% and 18%, respectively. Learn how The Guest Book stacks up against other TBS TV shows.

Will TBS cancel or renew The Guest Book for season three? Though the ratings are way down, I think it will be renewed for a third season. I’ll update this page once we have official news. Subscribe for free cancellation or renewal alerts about The Guest Book.

9/28/19 update: TBS has cancelled The Guest Book so there won’t be a third season.

What do you think? Should The Guest Book TV show have been renewed for a third season? Are you sorry that TBS cancelled this TV show, instead?

Bring it back! I just found this show and want more! The first episode was good, but by the 4th, I was hooked. Love that it’s different people with each story. I find myself laughing and asking, what’s wrong with these people? Great entertaining stories!

I want another season !!! Great show! Boooo TBS for cancelling something I actually enjoyed

Great querky show! I was hoping for a S3! Boo for canceling…

Boooooo TBS!!! The Guest Book rocked! People of Earth too!
These shows were guaranteed to make us laugh. We reminisce episodes and laugh again.

I love the show. I happen to come across it one night and binged watched the episodes I missed. I hope its not cancelled and has a season 3 and maybe even a season 4 !!

i loved this show!! wish they will do a 3rd season!

Renew it….PLEASE. I see why people would change the channel after 2 min of watching but you only get the concept of the show when you watch a full episode and get hooked. Its so funny and I love the character changes. Hilarious show.

Please renew, one of my all time fav shows

Renew! Renew! Renew! My husband and I have thoroughly enjoyed the clever writing of Seasons 1 and 2. The way it has the absolute strangest characters to ever set foot in a house or cabin has kept us as fans from the very opening of the first show!