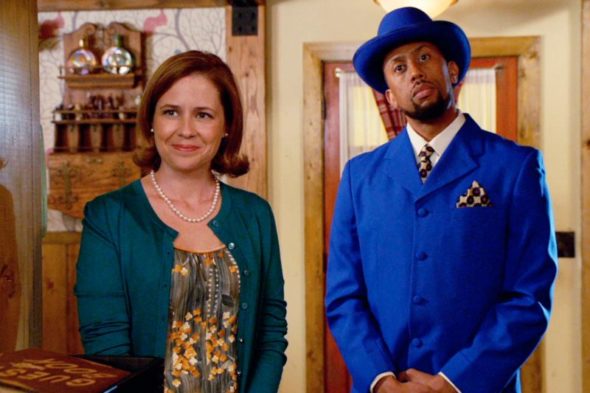 The comedy series centers on the vacationers who stay in Froggy Cottage in the small town of Mount Trace. While the house and townie characters remain the same, each episode follows new guests. The cast includes Kellie Martin, Charles Robinson, Aloma Wright, Carly Jibson, Lou Wilson, and Garret Dillahunt.

Ratings have never been particularly high for The Guest Book. The show’s second season averaged a 0.30 in the 18-49 demo and 907,000 viewers. That’s a near 25% drop in the ratings compared to season one.

Me: "TBS decided they aren't doing any more Guest Books so I have to figure out what to write next."

My 12 year old: "Why don't you write Season 10 of The Office? People would watch that."

What do you think? Have you seen The Guest Book? Would you have watched a third season?

Very disappointed to see there will be no more episodes of the guest book. We only found it last year on tv and wish there were more episodes. It is cleaverly written and is definely not your average show. It gives a great point of view. Love to see another season or two.

My wife and I loved this show. The episodes were hilarious, creative with great twists, and all star actors brought in for each episode. After each episode we marveled at the caliber of writing, acting, and themes. More than once we wondered who the team of writers were because they are geniuses and we want to find more of their work.

I agree with previous comments, would like more more more of this show.

I would most definitely have watched many more seasons of The Guest Book. I found it very funny, extremely clever and well written. The cavalcade of different actors was very impressive! I was so disappointed that it was cancelled.

Only the good crazy comedy shows are being canceled regularly. Hate it!

So disappointing! Why do all the really smart, well written shows get canceled? My husband and I really liked The Guest Book. We would definitely keep watching more seasons! Maybe Amazon or Netflix will pick it up?

So true! I wish someone will pick it up.

Yall need to add a season 3 and add more episodes I really love the show I could watch four or five more seasons if you made them.

Would definitely have watched season 3. The Guest Book was a hoot and the only thing that drew me to TBS.

Great show with great characters. Too bad it was cancelled.

I enjoyed The Guest Book. Different characters every show reminded me of Love American Style. Too bad many missed its humor.

Another crazy funny show cancelled just discovered The Guest Book and it’s cancelled like the “Detour “another extremely funny show both cancelled this year on TBS It’s hard to find comedy’s like these and once you find them they get axed . You can only hope they are replaced with shows equally as funny but it is never usually the case

Loved this show. One of the funniest..

My husband I are extremely disappointed one of our favorite shows has been cancelled. Maybe go to Netflix and give em multiple seasons?