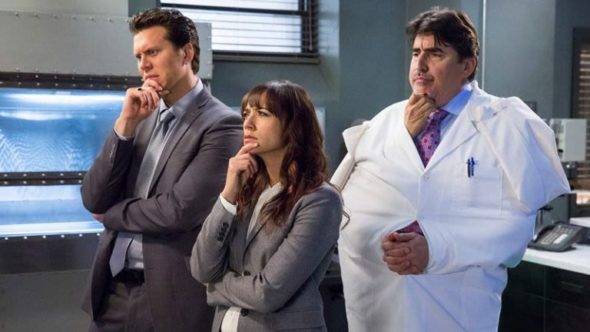 It’s end of watch for Angie and her team. To little surprise, TBS has cancelled the offbeat and low-rated comedy series, Angie Tribeca. It won’t be back for a fifth season.

The cancellation comes as no surprise as some members of the cast have already moved onto other projects. What’s perhaps more surprising is that the series lasted as long as it did with such low ratings. The cable channel had a very unorthodox strategy for Angie Tribeca, sometimes releasing whole seasons in a marathon prior to doling out the episodes in a regular weekly timeslot.

A few weeks ago, TBS officially cancelled fellow comedy series Wrecked and for now, the fate of Greg Garcia’s The Guest Book is unknown. The latter finished airing its second season in December. This leaves The OG, The Detour, and Search Party as TBS’ active original scripted comedies.

What do you think? Did you enjoy the Angie Tribeca TV show? Would you have watched a fourth season of this offbeat TBS comedy series?