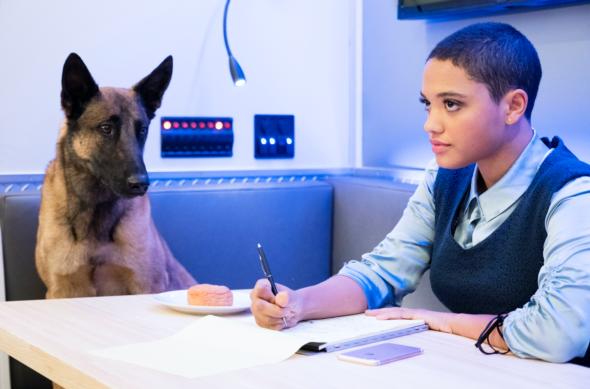 The fourth season of Angie Tribeca averaged a 0.08 rating in the 18-49 demographic and 266,000 viewers. Compared to season three that’s down by 70% and 53%, respectively. Learn how Angie Tribeca stacks up against other TBS TV shows.

Will Angie Tribeca be cancelled or renewed for season five? Compared to season three, the ratings were way down for season four. I’m not sure how much ratings matter with this quirky little series though. TBS is fond of premiering it as a marathon and I suspect a lot of younger viewers are watching it via the app or on-demand. With numbers this low, I’m thinking Angie will be cancelled but would not be shocked if they ordered a fifth season too. I’ll update this page with any official news on the show’s status. Subscribe to receive free alerts regarding Angie Tribeca cancellation or renewal news.

What do you think? Were you hoping that the Angie Tribeca TV show would be renewed for season five? Are you sorry that TBS cancelled this TV series, instead?

How could they DESTROY this great show after the third season? Season four is a huge disappointment, total change in the personnel and overall aura of the show. They were in a groove, but season four destroyed the entire premise of the show. They also increase the stupid, needless cussing, once again doing it no good whatsoever. Rashida Jones ought never to have accepted this new venue. As soon as I saw the first episode of Season 4 I knew it was going to be gone. Surprised they made it ten full shows. STUPIDITY!!!

I love this show so does my family. It would have way more viewers if they advertised more. I don’t normally watch that channel. Hoping it returns

This is a class show in every respect.

It draws on a variety of things done before but combines them perfectly.

It’s no wonder that many high profile actors play little parts that enhance it even more.

I love the show, have been since it first aired. It has a Naked Gun, Airplane flow to it. I did like season 4, but I wasn’t in love with it. I felt like it was straying away from what it started out as and the story line was a little odd. While I loved the gags, the SDF having a different truck each time they traveled and the inside being impossibly larger than reality allows; I felt the story line with AJ was just too much. I understood the comedy of it, but the joke didn’t work for me.… Read more »

I just watched the first three episodes of Season Five. Love this show! I hope it stays in production.

Totally agree with loving first 3 years
Last one so so. Hope for a great 5th season