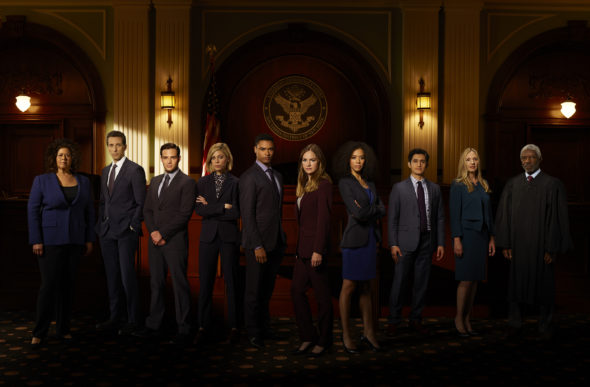 TV show description:
From creator Paul William Davies, the For the People TV show is a Shondaland legal drama. The story unfolds at “The Mother Court,” i.e. the United States District Court for the Southern District of New York.

The series centers on six accomplished attorneys, who work on both sides of the law. Whether they represent the defense or the people, these young lawyers ply their trade trying some of the most publicized cases, and in federal court, the stakes can be sky high.

Their arguments are heard by Judge Nicholas Byrne (Curtis-Hall), who presides over some of the most controversial cases before the court. Meanwhile, Clerk of Court Tina Krissman (Smith) makes sure everyone stay in line.

As their lives overlap outside of court, as well as at work, these young lawyers will face some of the biggest personal and professional challenges of their careers, at the most prestigious trial court in the U.S.A.

Series Finale:
Episode #20 — A Choice Between Two Things
On Election Day, Jay turns to Kate and the team for help after his parents and other voters are illegally intimidated at their polling place. Meanwhile, Roger and Jill’s relationship is at an impasse when Sandra learns that they are romantically involved and challenges Jill’s judgment. Elsewhere, Seth gets assigned to the case of a lifetime, but his anxiety increases when he is appointed a bodyguard to help protect him, all while Sandra and Ted take their relationship up a notch on the season finale of “For The People,” THURSDAY, MAY 16 (10:00-11:00 p.m. EDT), on The ABC Television Network, streaming and on demand.
First aired: May 16, 2019.

What do you think? Do you like the For the People TV series? Should this TV show have been cancelled or renewed for a third season on ABC?

This is a well-written, well-acted series which we immediately got into and watched pretty much back to back. Why there is no Season 3 is beyond me. Bring it back!

WE NEED FOR THE PEOPLE TO BE RENEWED. THERE ARE NO BAD COMMENTS ON HERE, ALL ARE GOOD, WANTING YOU TO GIVE US FOR THE PEOPLE. PLEASE AND THANK YOU.

Please, please ,please give us a few more seasons. I love that show!!

Bring it back, love the show. Real feelings for peoples cases makes it a great show

I want a season 3

ONE OF MY FAVORITES. IT SHOULD ABSOLUTELY NOT BE CANCELLED

LOVED For the People! PLEASE RENEW!!!! I love the cast. I love how fast paced it is. I LOVE the word plays, and I love more than anything how well it shows both sides of the law. It does this better than any other legal drama I have ever seen. The writing is beautiful and transformative, especially the closing arguments.

Why would you cancel a show that everyone watch? This show is so insightful and entertaining, please don’t cancel it.

Loved For The People. So sad it is cancelled. It was a smart fast moving drama. Please reconsider

Wow, ANOTHER one of my favorite shows is cancelled!? What is going on here!? Do I have really bad taste or are the people that are making these decisions totally off base!?!? I think the latter!!!! Pleaseeeee bring this one back!?!?

This show is both heart wrenching and heart warming at the same time. I literally cried after each episode, especially Season 2!! The storylines made such an impact due to this **** really happens everyday and it’s sad and disgusting! Talk about reality! Season 2 should most definitely win an award!! Best show ever made! Please don’t cancel it!!