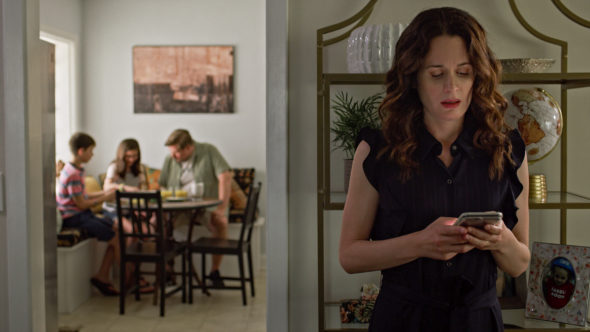 Are fans in for a hard time or an easy one? Is the Easy TV show cancelled or renewed for a fourth season on Netflix? The television vulture is watching all the latest TV cancellation and renewal news, so this page is the place to track the status of Easy, season four. Bookmark it, or subscribe for the latest updates. Remember, the television vulture is watching your shows. Are you?

There’s no need to wonder whether I’ll feast or starve — ahem — that is, whether Netflix will cancel or renew Easy for season four. When the streaming service made the last renewal official, it confirmed it was for a third and final season. While I’m preparing to dine, I’ll still keep an eye on the trades and update this page relevant developments. Subscribe for Easy news alerts.

What do you think? Is the third season the right time to end the Easy TV show? Were it up to you, would Netflix have renewed Easy for season four?

This is an excellent show that deserves future seasons. Beautifully written, compelling storytelling, with a fantastic mix of established and burgeoning stars. With so many streaming services producing more original content than ever before, Easy more than deserves a place at the table. Let’s hope someone has the vision Netflix has sadly lost and gives us a Season 4 and beyond.

I’m pretty sad that they cancelled Easy. There was so much more to explore for all the characters. I suppose that was partly the purpose of the show. Nobody knows where their life will take them…right? Maybe we can revisit in a few years? It’s sort of unbearable not knowing what’ll happen with Sophie and Drew. Will she move back to Chicago…? What will happen with Kyle and Andi’s relationship. And, oh my gosh, what’ll happen with Jeff and Sherri and Matt and Noelle. The brewery, the dog treats? Will it all work out? Ahhhhhhhhhhh… Netflix, please reconsider! Take a… Read more »