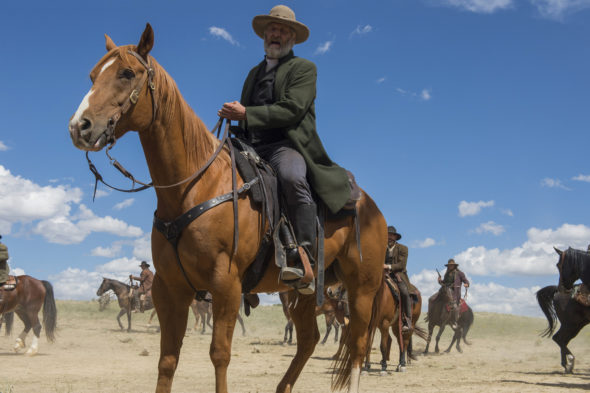 Can Roy Goode and the ladies of La Belle survive Frank Griffin’s wrath? Has the Godless TV show been cancelled or renewed for a second season on Netflix? The television vulture is watching all the latest TV cancellation and renewal news, so this page is the place to track the status of Godless, season two. Bookmark it, or subscribe for the latest updates. Remember, the television vulture is watching your shows. Are you?

Streaming on the Netflix paid subscription platform, Godless stars Jeff Daniels, Jack O’Connell, Michelle Dockery, Scoot McNairy, Thomas Brodie-Sangster, Merritt Wever, Jeremy Bobb, Whitney Able, and Samantha Soule. The 19th century western, from creators Scott Frank and Steven Soderbergh, centers on Roy Goode (O’Connell). After betraying his mentor, the infamous gangster Frank Griffin (Daniels), Roy must go on the run from him and his “brotherhood” of criminals. He seeks refuge at the ranch of the widow Alice Fletcher (Dockery), in La Belle, New Mexico, where women run the show. When the citizens learn Griffin and his gang are on their way, they unite to defend themselves against these notorious outlaws.

This was a close-ended series so there won’t be a second seaosn. However, I’ll keep an eye on the trades and update this page with breaking developments. Subscribe for free Godless cancellation or renewal alerts.

What do you think? Do you hope the Godless TV show should have been renewed for a second season? Are you glad that the series ended after one season?

Excellent series would like to see a second series

Loved the movie,. Would love to see a 2nd every a 3rd

Loved the show after the first episode. It would be great if they added more
seasons like the Longmire series!

Great western , should be a few more season

Love the show I didn’t even realize it only had 1 season until I got hooked on the first episode, I would love for it to be another season or 2.

One of the best westerns in a long long time. Couldn’t Roy Goode find more adventure:trouble in California??????

Just finished watching Godless and loved it! The writing, the direction, the music, the casting and the acting were all terrific. I so wish Scott Frank was working on a 2nd season screenplay and that Netflix would film it. It’s an unusual Western and compelling story.

Needs a second season. Too good not to.

Please make season 2 – we love it and must see the love between Alice & Roy and their future in California with all the money & love.

So sad there isnt another season. Please consider filming a season 2!

I Loved this show. I would definitely watch it if they came back with more. This reminded me of the good old westerns, that I’d sit and watch with my Pops. So tired of zombies and vampires…just give me the godless of La Belle!

Gutted there is no second season, I was so looking forward to it

so terribly disappointed that godless is not having a 2 season