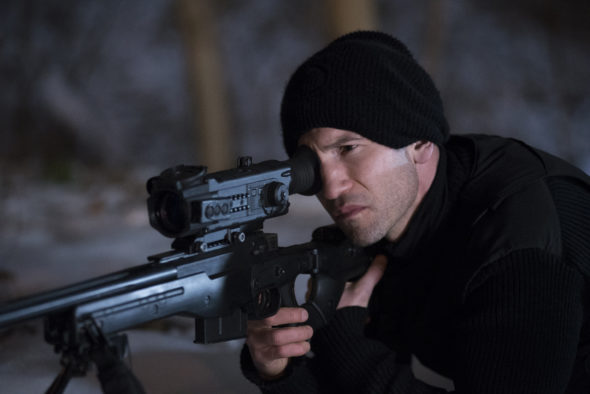 Where will Frank Castle’s quest for revenge end? Has Marvel’s The Punisher TV show been cancelled or renewed for a second season on Netflix? The television vulture is watching all the latest TV cancellation and renewal news, so this page is the place to track the status of Marvel’s The Punisher, season two. Bookmark it, or subscribe for the latest updates. Remember, the television vulture is watching your shows. Are you?

Streaming on the Netflix paid subscription platform, Marvel’s The Punisher stars Jon Bernthal, Ebon Moss-Bachrach, Deborah Ann Woll, Ben Barnes, Amber Rose Revah, Michael Nathanson, Jaime Ray Newman, Jason R. Moore, Daniel Webber, Michael Nathanson, and Paul Schulze. The story centers on Frank Castle (Bernthal). After his wife and children are killed, Frank seeks revenge. Unlike others in the MCU, he is not possessed of superpowers and is fueled only by his grief and anger. Although he wears neither cape nor mask, this vigilante is known throughout New York City only as “The Punisher.” Now, Frank is out to uncover a vast conspiracy that stretches far beyond the criminal network in the Big Apple.

Unless they decide to publicize its viewership, it is hard to tell if Netflix will cancel or renew Marvel’s The Punisher for a second season. Flying blind, I think it will get a second season, as long as there is the creative will to continue. Still, that’s just speculation, so I’ll keep an eye peeled and update this page with breaking developments. Subscribe for free updates on any Marvel’s The Punisher cancellation and renewal news.

What do you think? Do you hope the Marvel’s The Punisher TV show will be renewed for a second season? How would you feel if Netflix cancelled this TV series, instead?

I’m hoping the show The Punisher will continue. While violent it’s entertaining. I like the main character…he plays the role well. Although we do have a lot of horrific events that include guns and mass murder, I don’t think this one show would have any effect on those events happening. I think most of the prople who have participated in these terrible events do so for other sick reasons. I doubt a TV show is what steers their sick minds. Usually it is a personal reason by a demented person who could find a reason from anywhere. I’m not usually… Read more »