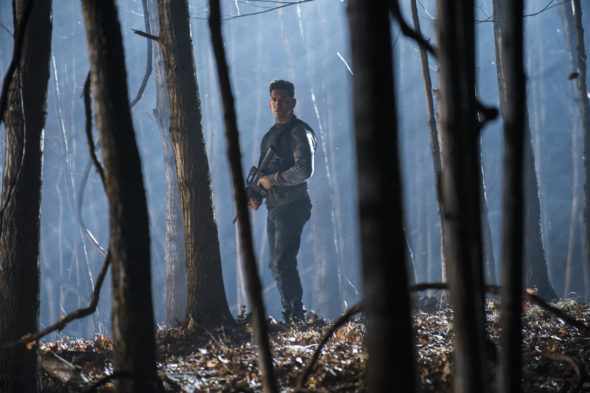 Is Frank Castle still out for blood? Has Marvel’s The Punisher TV show been cancelled or renewed for a third season on Netflix? The television vulture is watching all the latest TV cancellation and renewal news, so this page is the place to track the status of Marvel’s The Punisher, season three. Bookmark it, or subscribe for the latest updates. Remember, the television vulture is watching your shows. Are you?

Streaming on the Netflix paid subscription platform, Marvel’s The Punisher stars Jon Bernthal, Ben Barnes, Amber Rose Revah, Jason R. Moore, Josh Stewart, Floriana Lima, and Giorgia Whigham. The story centers on Frank Castle (Bernthal) who, unlike others in the MCU, is not possessed of superpowers. Rather, he is fueled by his grief and anger. Although he wears neither cape nor mask, this vigilante is known throughout New York City only as “The Punisher.” In the second season, Frank is drawn into a mystery involving the attempted murder of a young girl, her assailants, and a secret she holds, as he simultaneously struggles whether to embrace his destiny as The Punisher.

Unless they decide to publicize its viewership, it is hard to tell if Netflix will cancel or renew TV shows. Netflix and Disney (which owns Marvel) seem to be parting ways though (see the Marvel’s Daredevil cancellation), so I don’t think Netflix will renew Marvel’s The Punisher for a third season. If it is not renewed, there is still a chance that additional seasons of Marvel’s The Punisher could run on Disney’s upcoming streaming service, Disney+. Since this is just speculation, I’ll keep an eye peeled and update this page with breaking developments. Subscribe for free updates on any Marvel’s The Punisher cancellation and renewal news.

2/18/19 update: To no surprise, Netflix cancelled Marvel’s The Punisher after two seasons.

What do you think? Were you hoping that the Marvel’s The Punisher TV show would be renewed for a third season? Are you sorry that Netflix cancelled this TV series, instead?

Yeah, Netflix isn’t going to keep Marvel content that is essentially free advertising to the larger body of Marvel content on Disney’s upcoming competing streaming service. This season of Punisher is most likely the last Netflix-produced Marvel content we will see.

Except for JJ Season 3, that’ll be the last

I love The Punisher, but it’s clearly doomed. Daredevil was the flagship Marvel show with the most critical acclaim and word of mouth. If that show can’t survive, there’s no hope for The Punisher or Jessica Jones. I’m surprised that they haven’t announced The Punisher’s cancellation yet. And once that hits, I’d be very surprised if they even wait until after Jessica Jones season 3 airs before announcing that show’s cancellation. You have to understand that for all the platitudes Disney and Marvel may spew about how they care about the fans, the fact is that all they care about… Read more »

Please renewed many more seasons to come I love it Netflix marvel they are the best show ever who with me on that one.